Construction is underway on 419 E Burnside, a 6 story mixed use building in the Central Eastside. The building will contain 157 residential apartment units, as well as two ground floor 2 live / work units. Continuous retail spaces will front onto E Burnside. 50 parking spaces will be provided for residents, as well as 12 parking spaces for the adjacent Central City Concern building, which will remain. Bike parking will be dispersed throughout the building. The design of the building is by Portland based Myhre Group Architects for Dallas based developer Trinsic Residential Group. 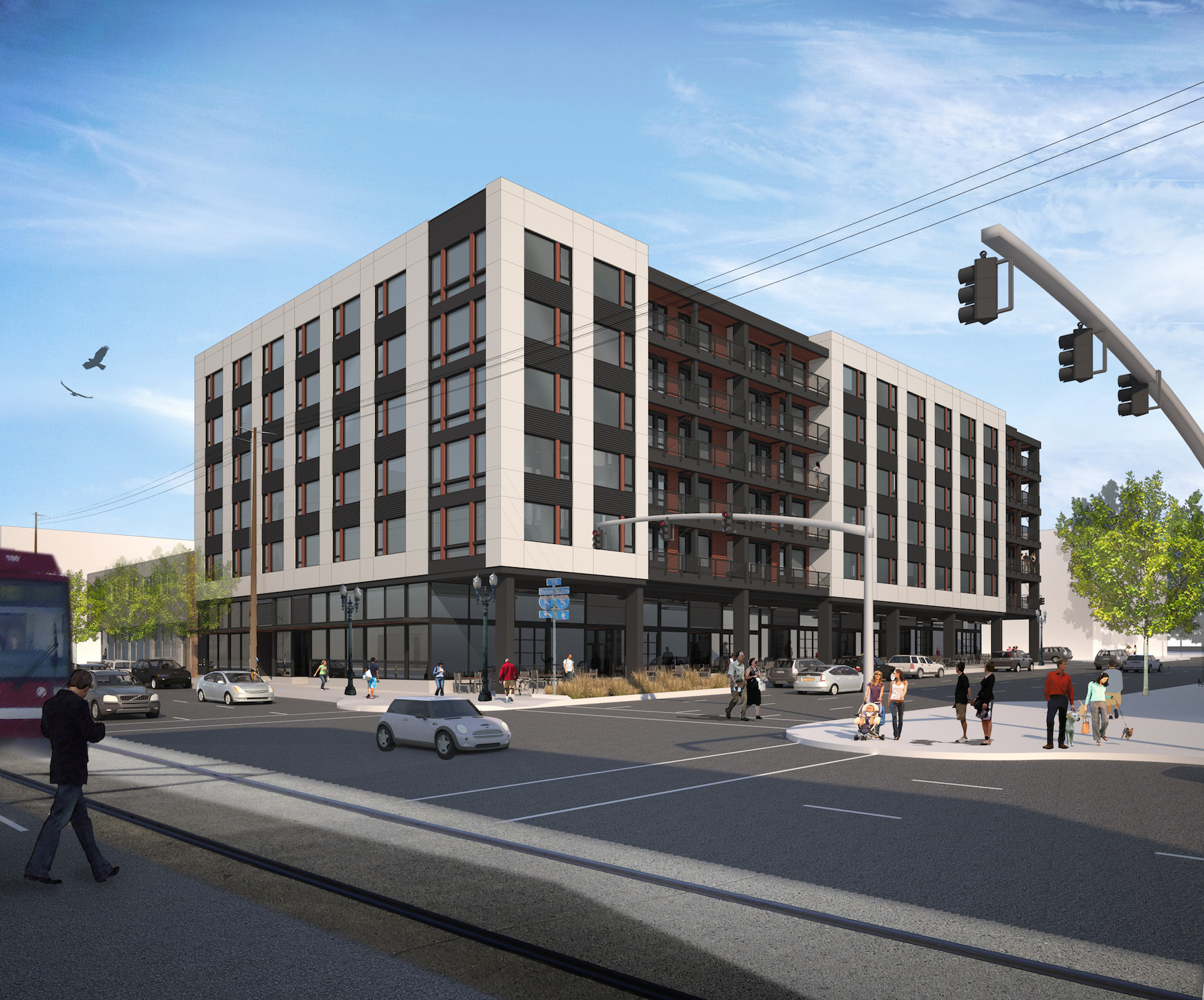 The 6 story L-shaped building will occupy three quarters of the block bound by E Burnside, NE Grand, NE Couch and NE Martin Luther King. The half block facing Burnside was most recently occupied by the Convention Center Auto Wholesale used car sales lot. The quarter block facing NE Couch was formerly used as car parking for the adjacent Central City Concern building, who sold the land to Trinsic for $1.1 million in the summer of 2015. According to The Oregonian the sale will help Central City Concern to “build 35 to 50, low-income housing units for clients in mental health or drug addiction” at another location, as yet to be determined. 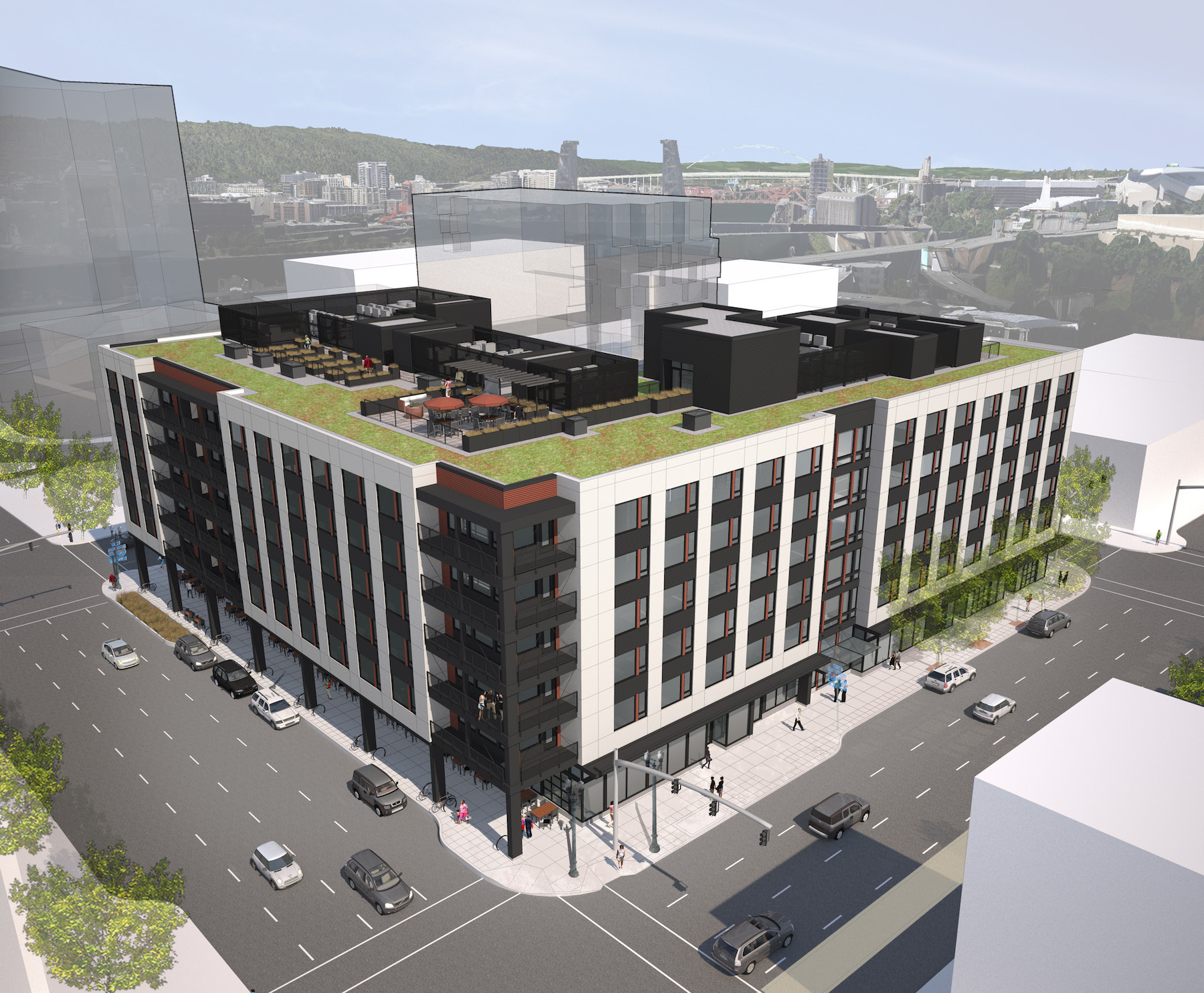 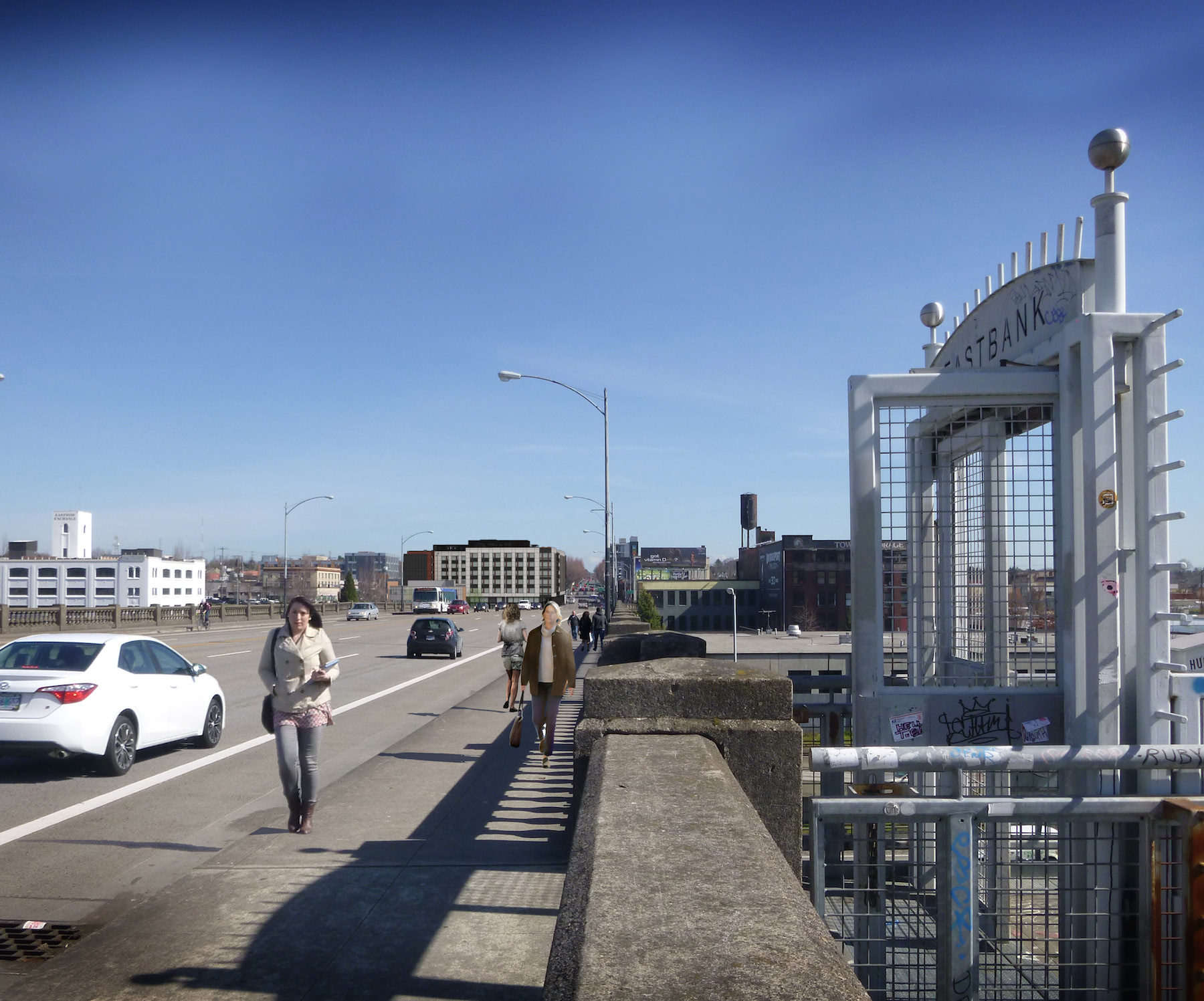 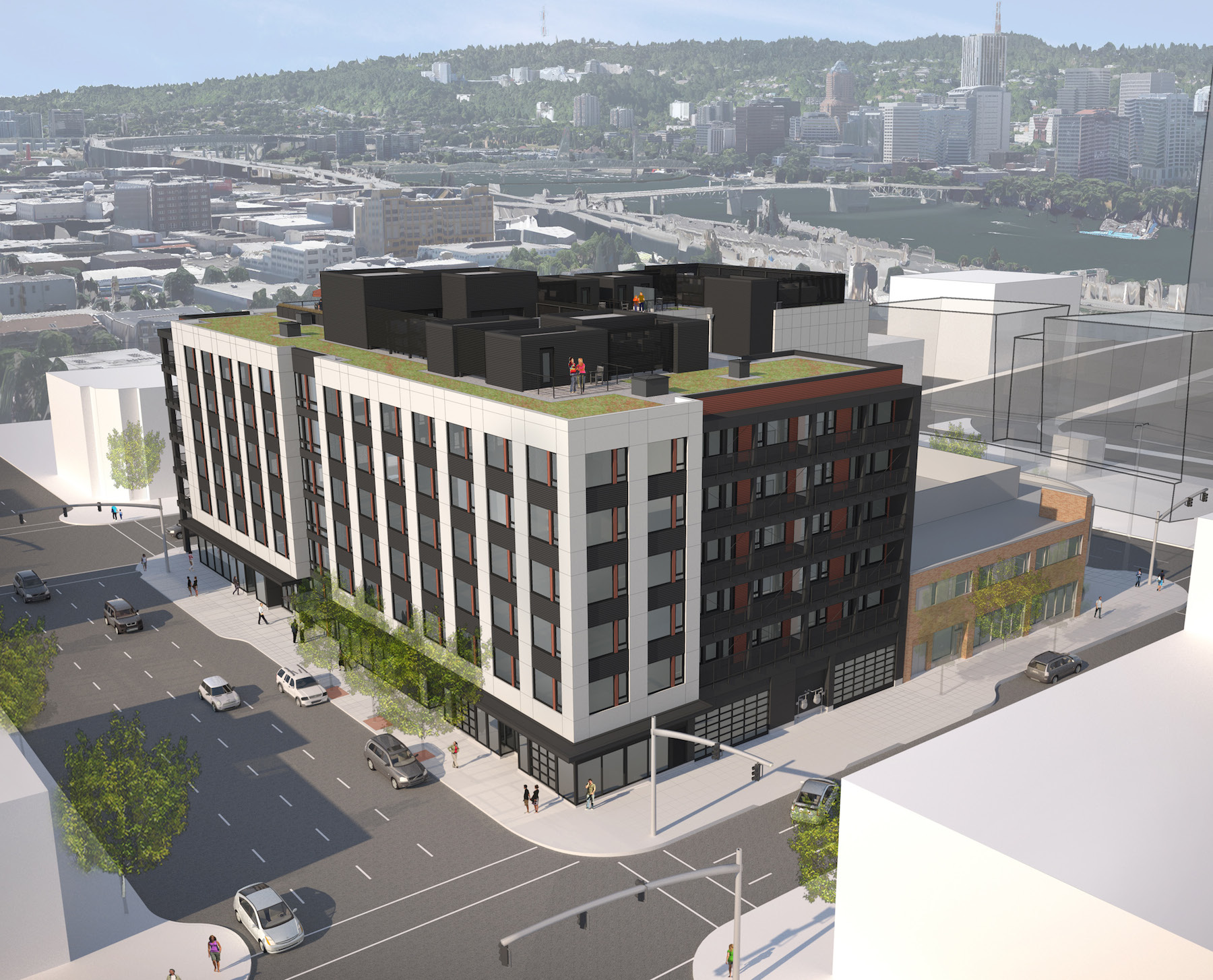 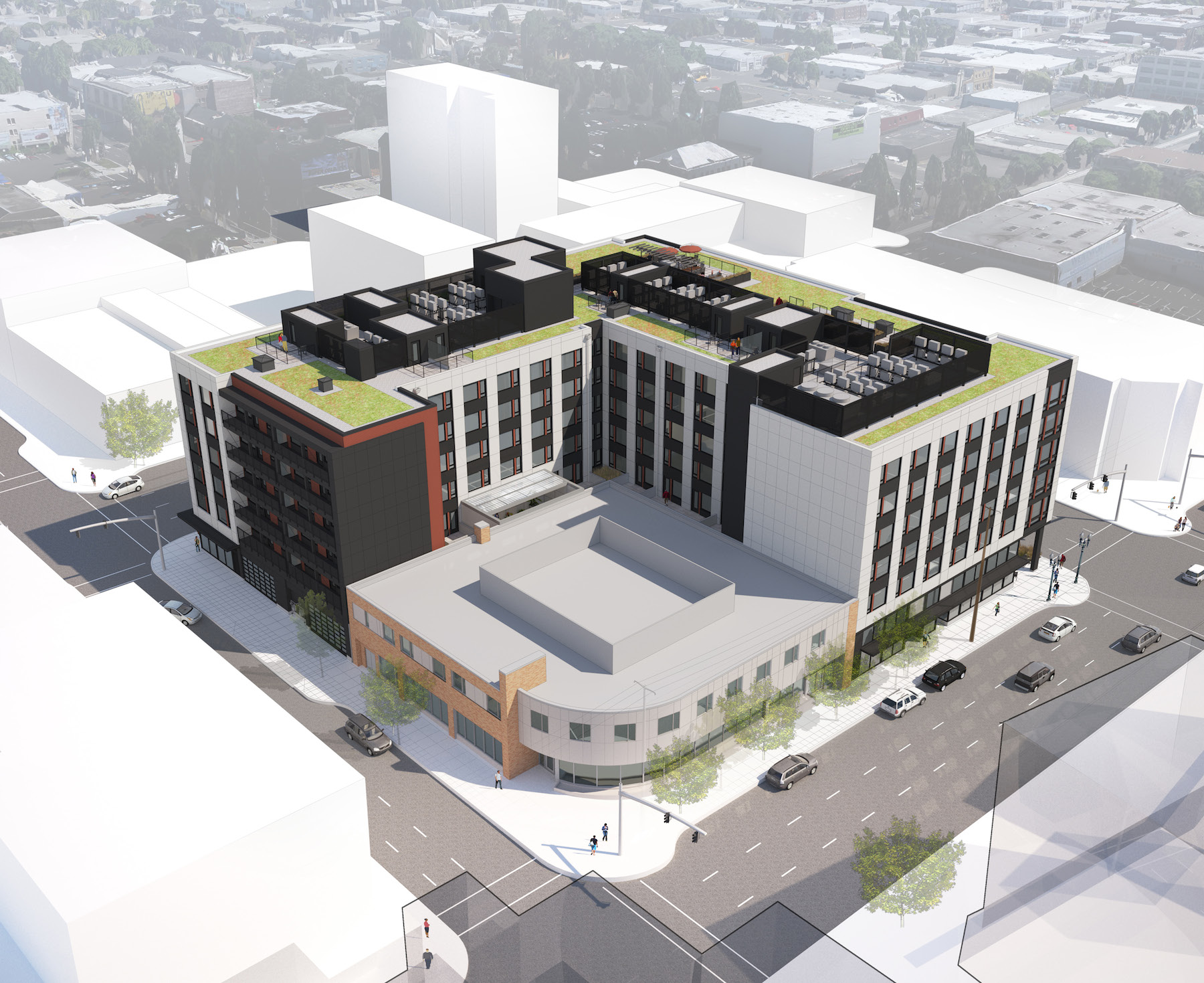 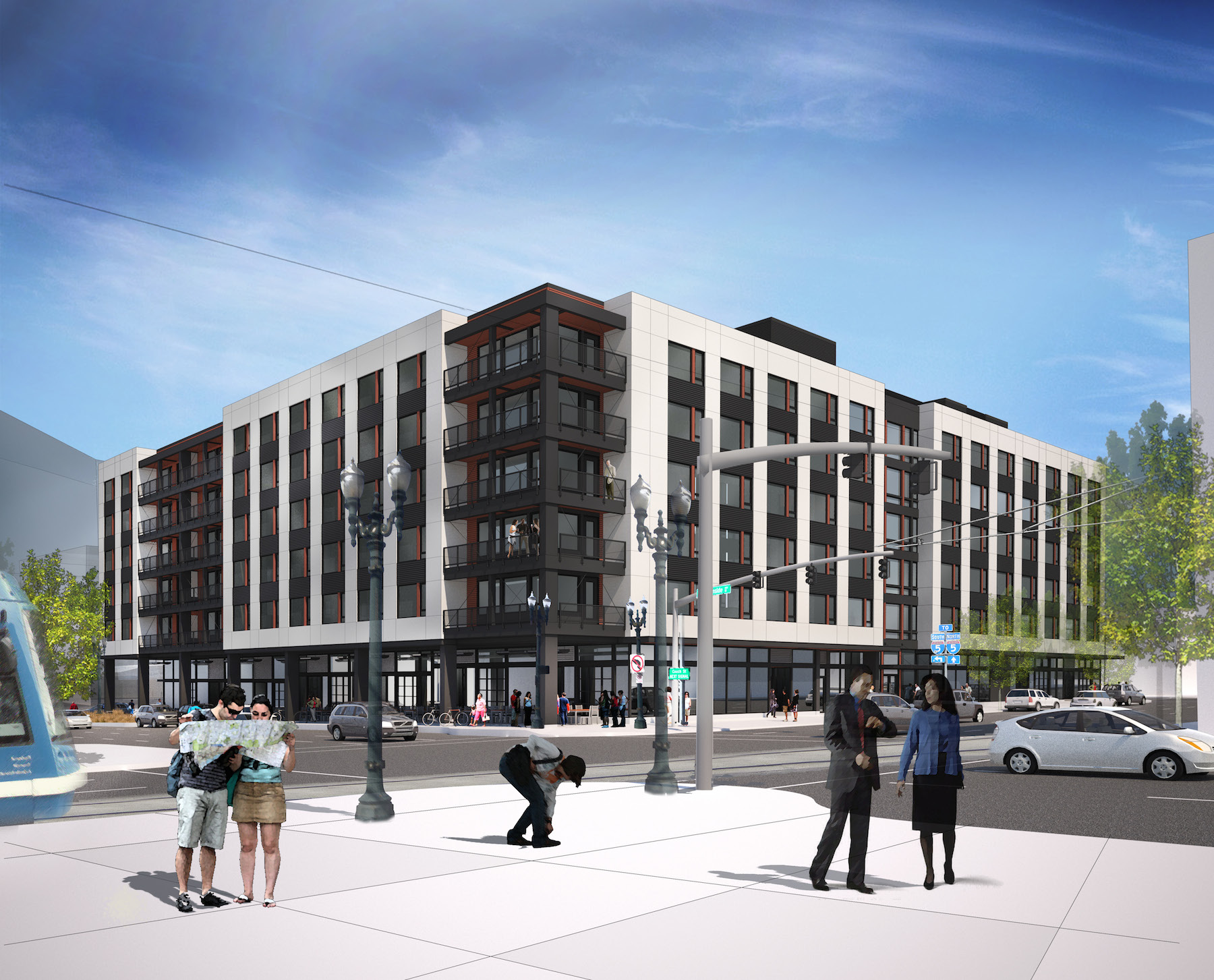 The project’s most prominent feature is a full block arcade over the East Burnside St sidewalk. The precedent for this is found in a number of older buildings along the street which had sidewalks carved into them as part of a 1920s project to widen Burnside. More recently, the Burnside Rocket and bSide6 have taken advantage of the Central City Design Guideline which encourages new projects to “Reinforce the Effect of Arcaded Buildings Fronting on East Burnside Street.” Other projects currently under review in the same area include the Jupiter Hotel and the Burnside Delta. 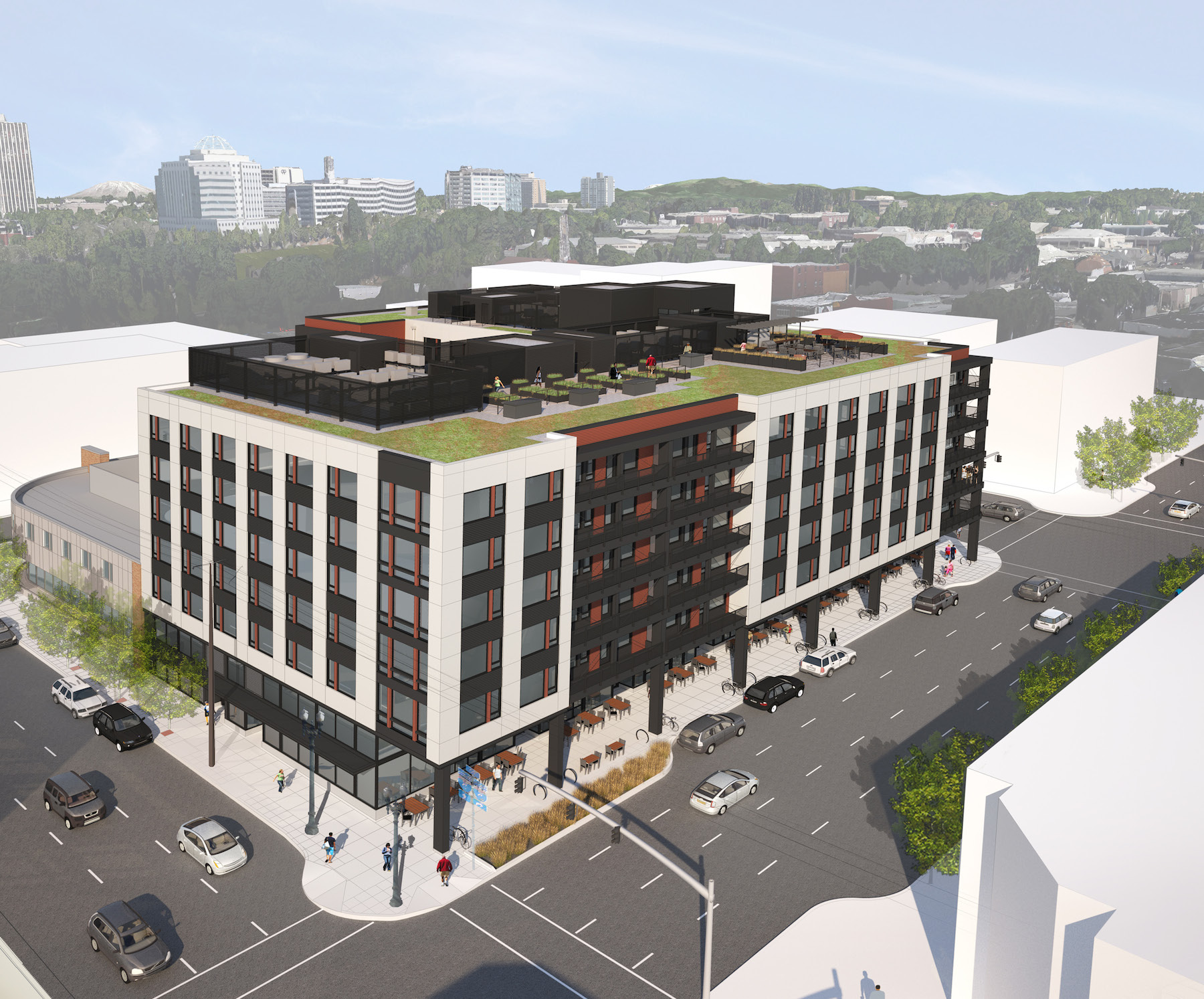 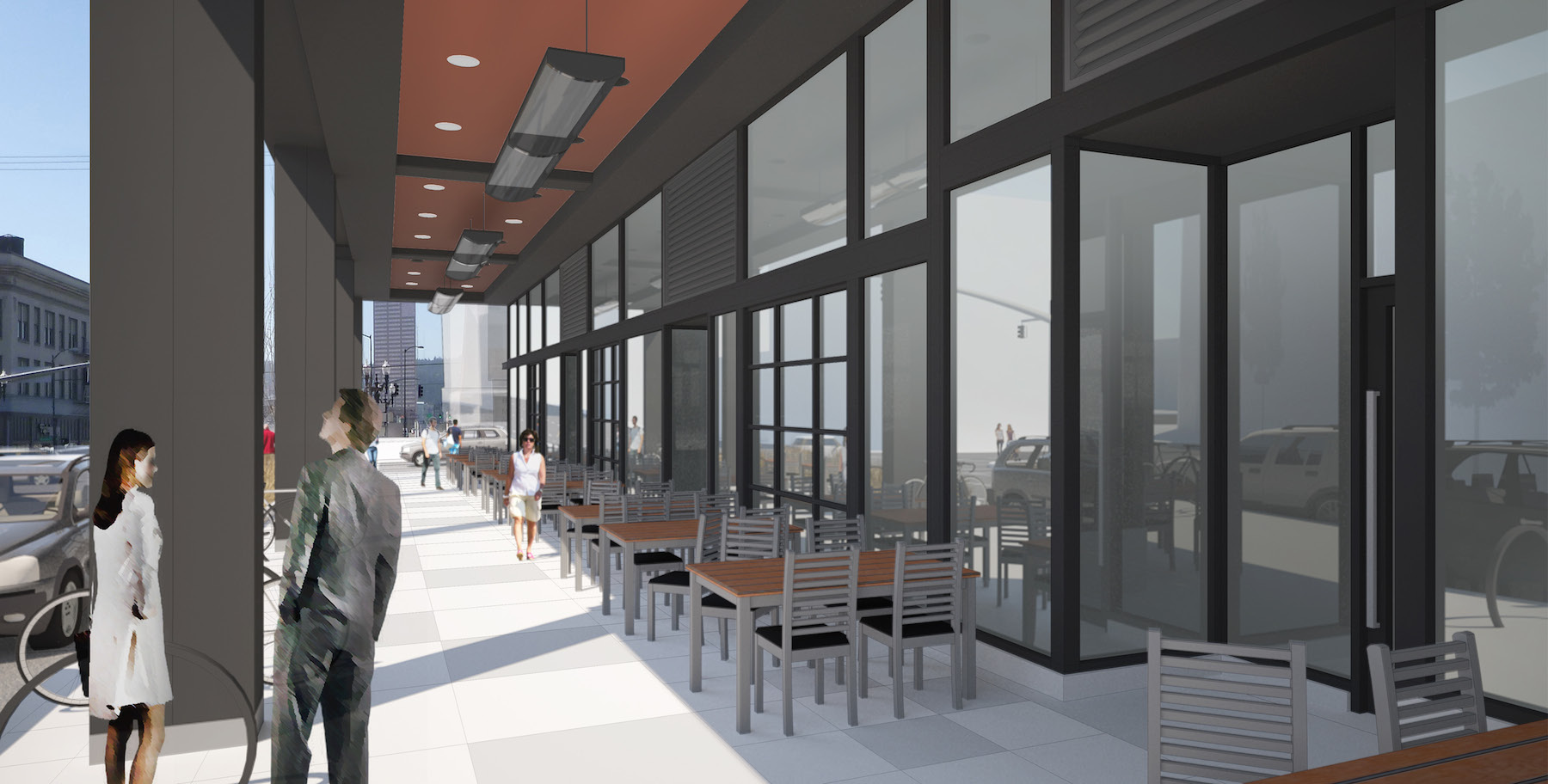 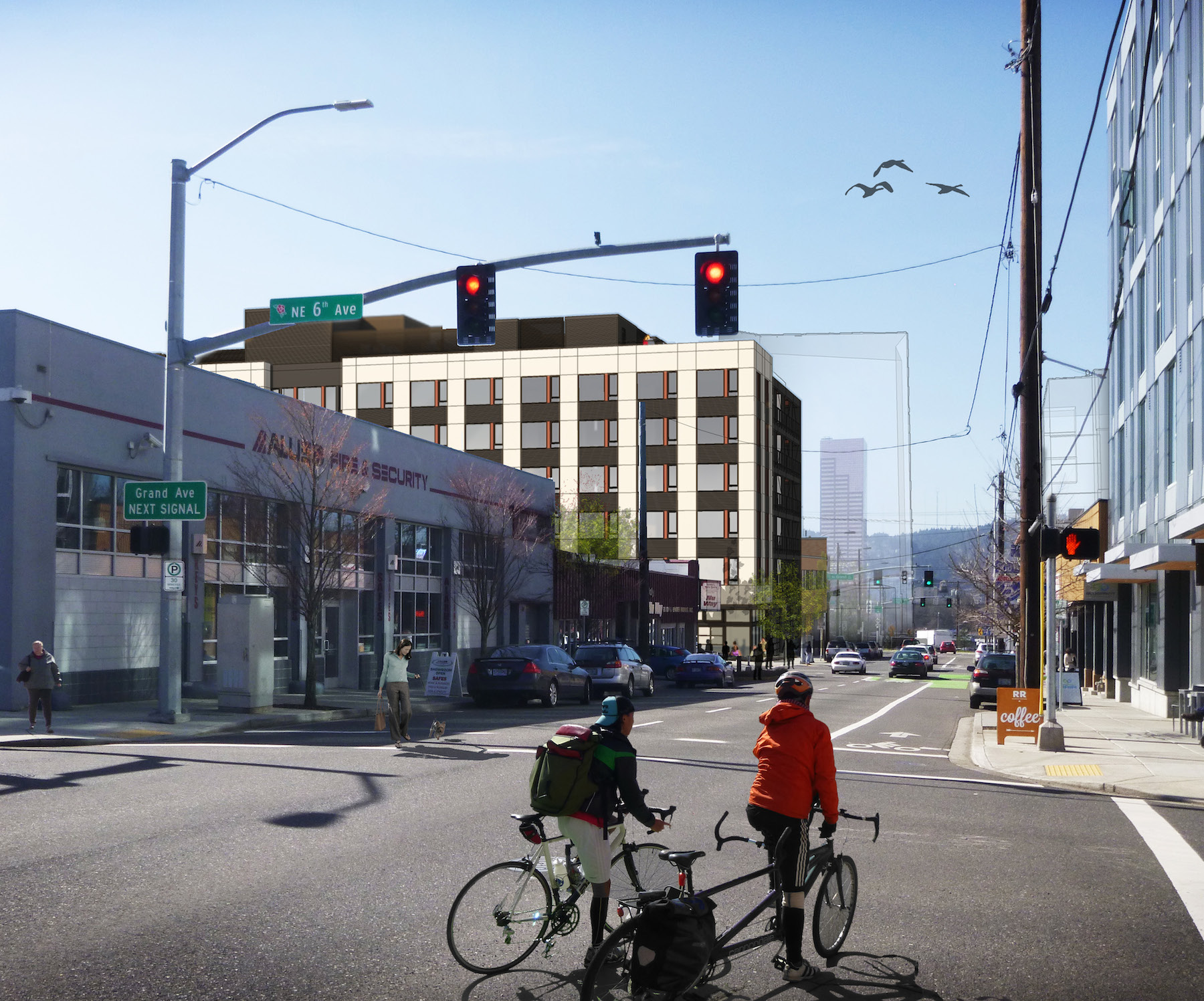 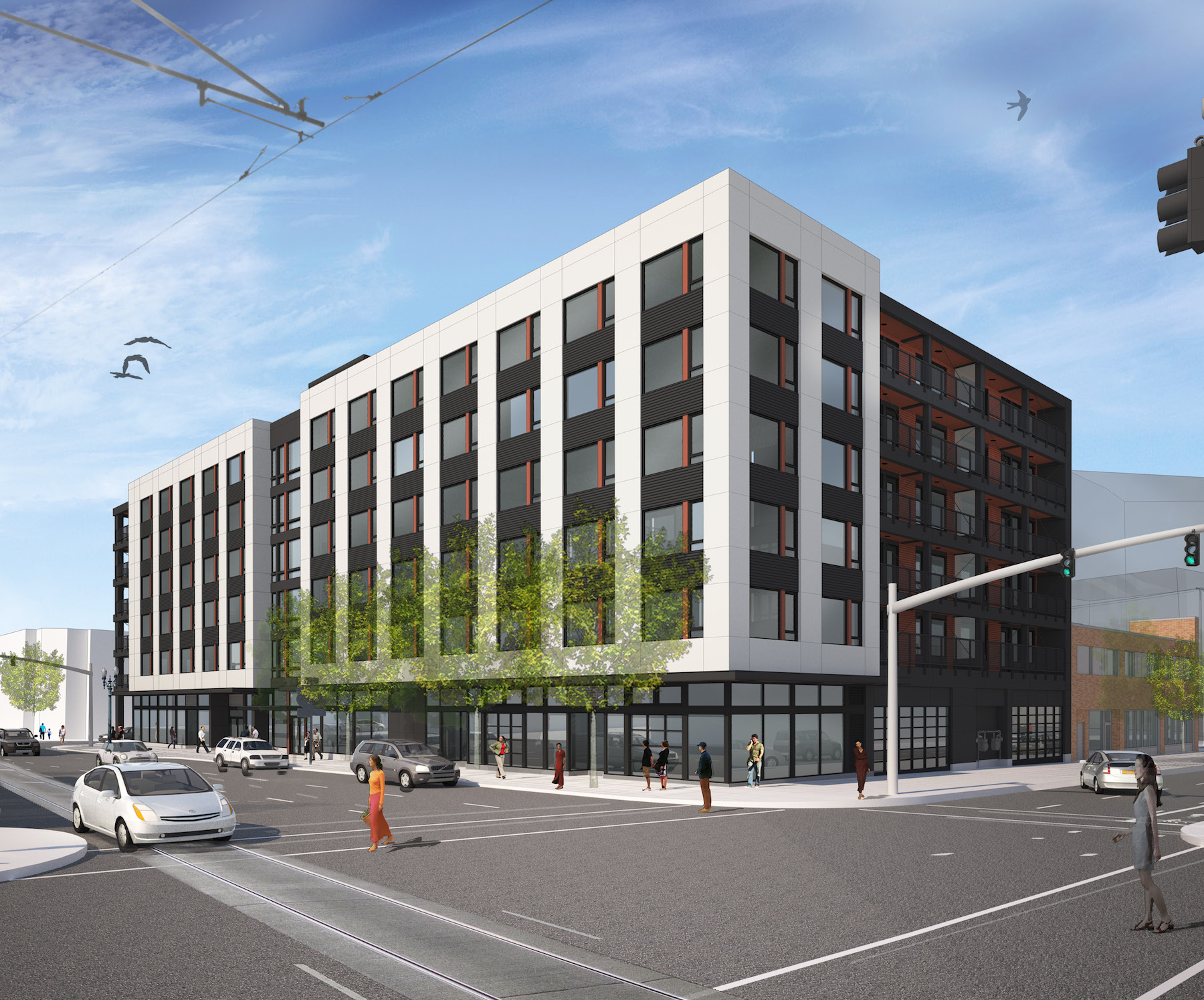 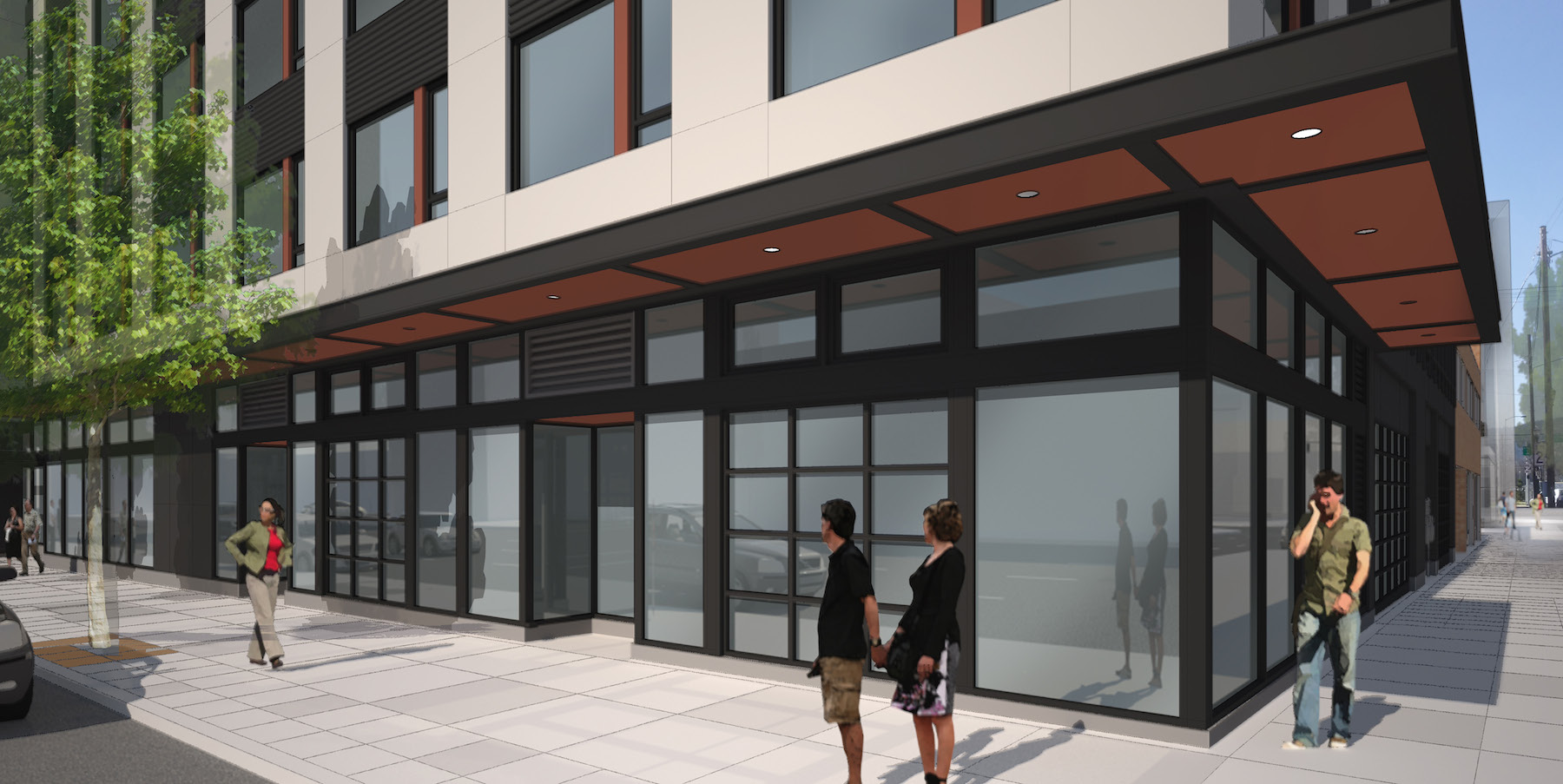 In the Staff Report and Recommendation to the Design Commission [PDF] the project was praised for the way the proposed arcade will tie the building in to “exiting fabric of the neighborhood”:

The proposed building employs high quality materials and design details that add texture, interest, and a sense of permanence, and activation of the façades through the incorporation of balconies, and clear views at the ground level. The proposed building, located at the intersection of two of the City’s most significant transportation couplets, is a relatively modest building with the unique ability to ground the rapidly growing Burnside Bridgehead complex of buildings. The incorporation of an arcade on the Burnside frontage ties the proposed building into the exiting fabric of the neighborhood and allows this building to serve as a transitional building from the older more traditional buildings to the more dynamic buildings of the Burnside Bridgehead.

At their December 4th 2014 meeting the Design Commission voted to approve the project. A permit for the excavation, shoring and foundations was issued on December 11th 2015. Construction began in early 2016. 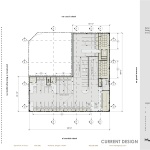 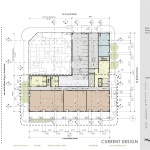 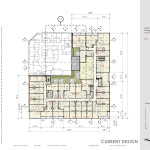 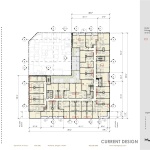 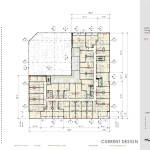 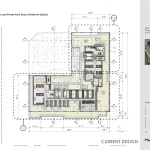 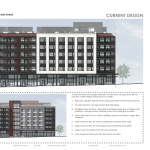 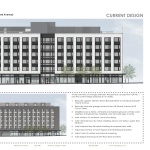 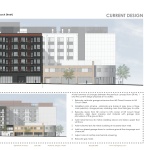 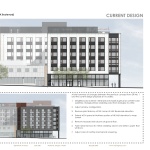 3 thoughts on “Under Construction in the Central Eastside: 419 E Burnside (images)”