A major renovation of Portland State University’s Neuberger Hall has gone before the Design Commission to receive Design Advice. The project is being designed by Hacker architects, and includes a complete interior renovation designed to address significant deferred maintenance. Significant alterations will also be made to the exterior envelope of the building, much of which is currently failing.

Exterior work on the eastern half of the building, facing SW Broadway, will include the replacement of the existing glazing and the introduction of a new entrance from the street.  Existing precast concrete panels will be removed and replaced with glazing, providing views into a new gallery / museum space proposed at the ground level.

The western half of the building will be completely re-clad. Brick will be used to clad the existing shear walls, and new glazing and metal panels will be added where the existing glass curtainwall is currently located. Wood is cladding is proposed at the ground level. 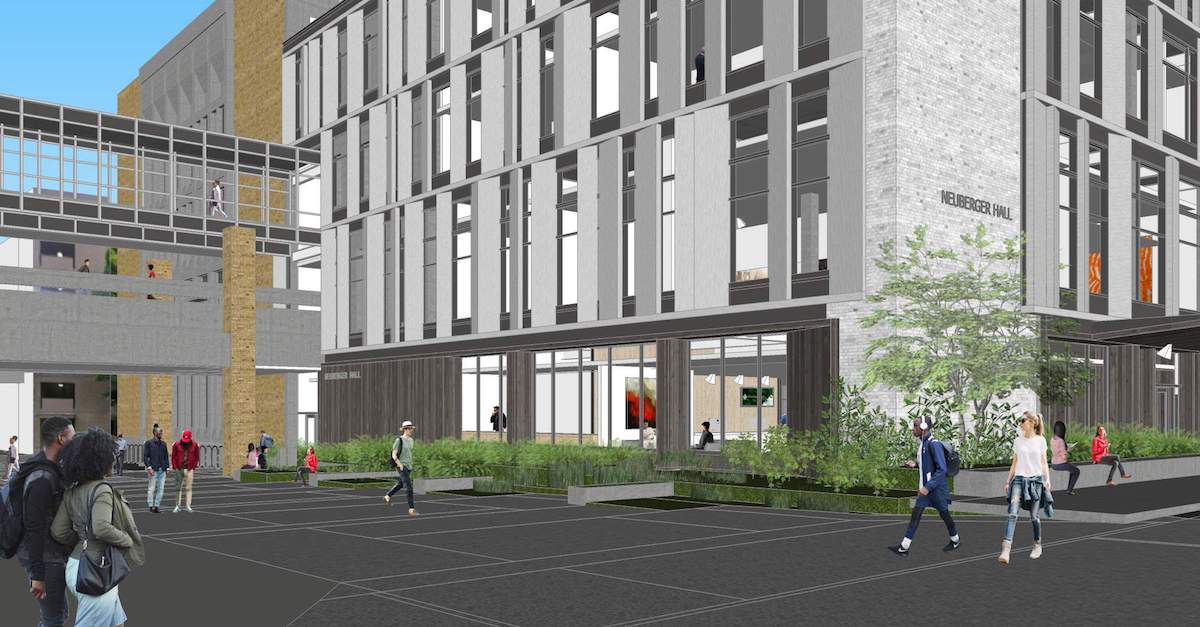 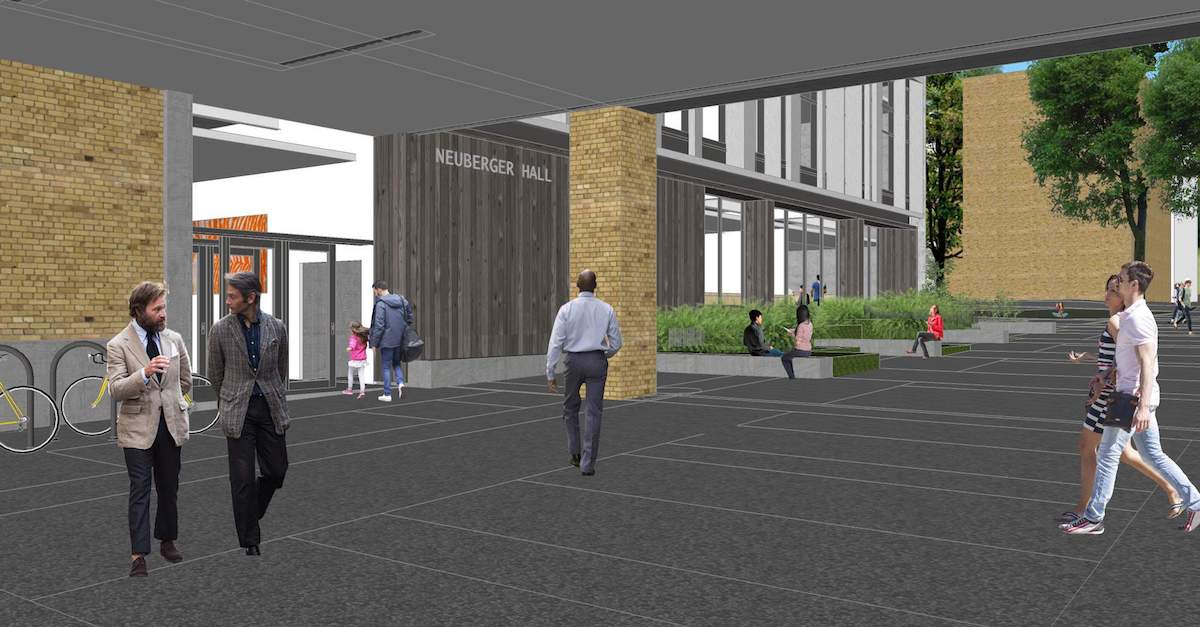 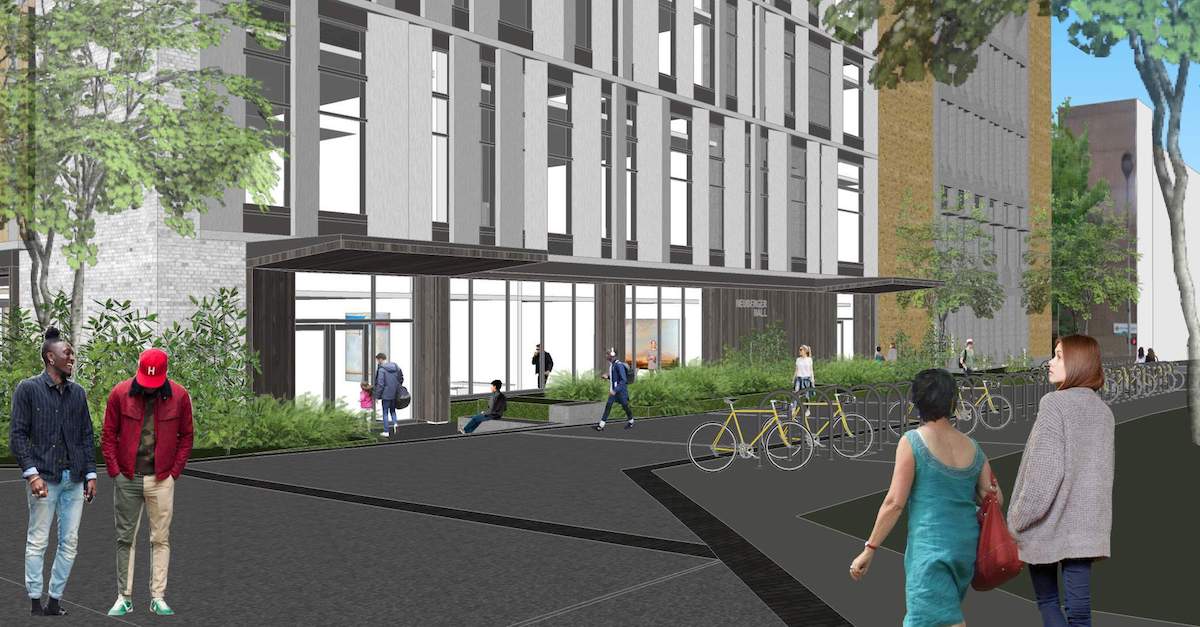 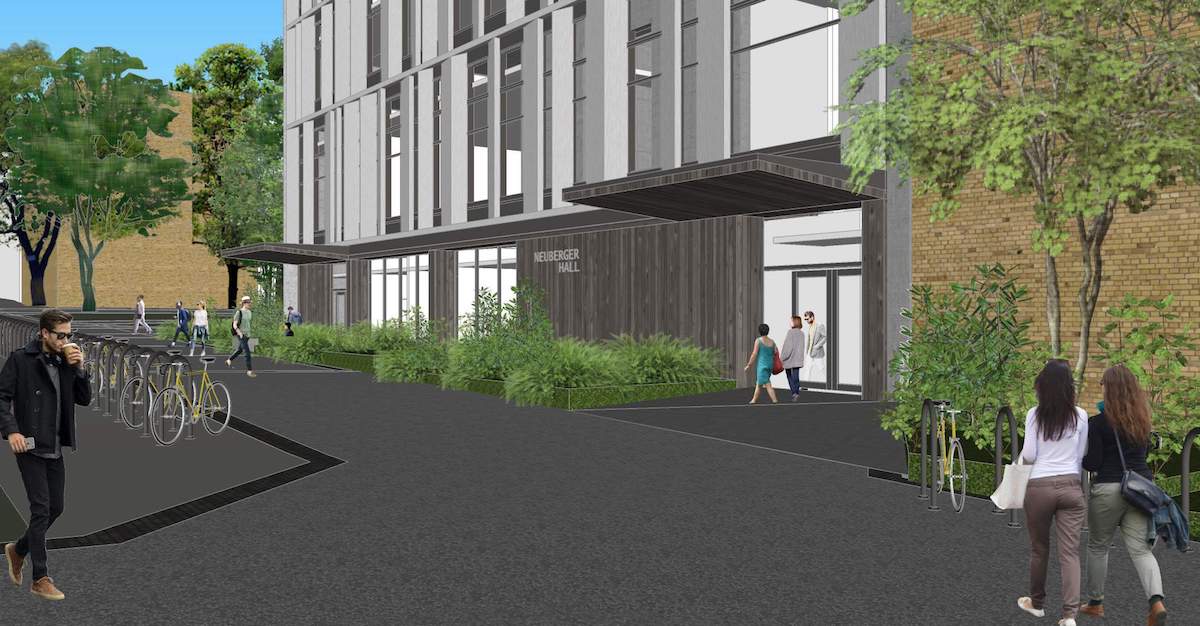 The circulation through the building will be rearranged, with new entries added facing the SW Broadway and the Park Blocks. At the interior of the building a new full height lightwell will be created. Public facing functions, including financial services, student services, the museum / gallery, and conference rooms will be placed at the ground floor. The upper floors will be used for classrooms and offices. 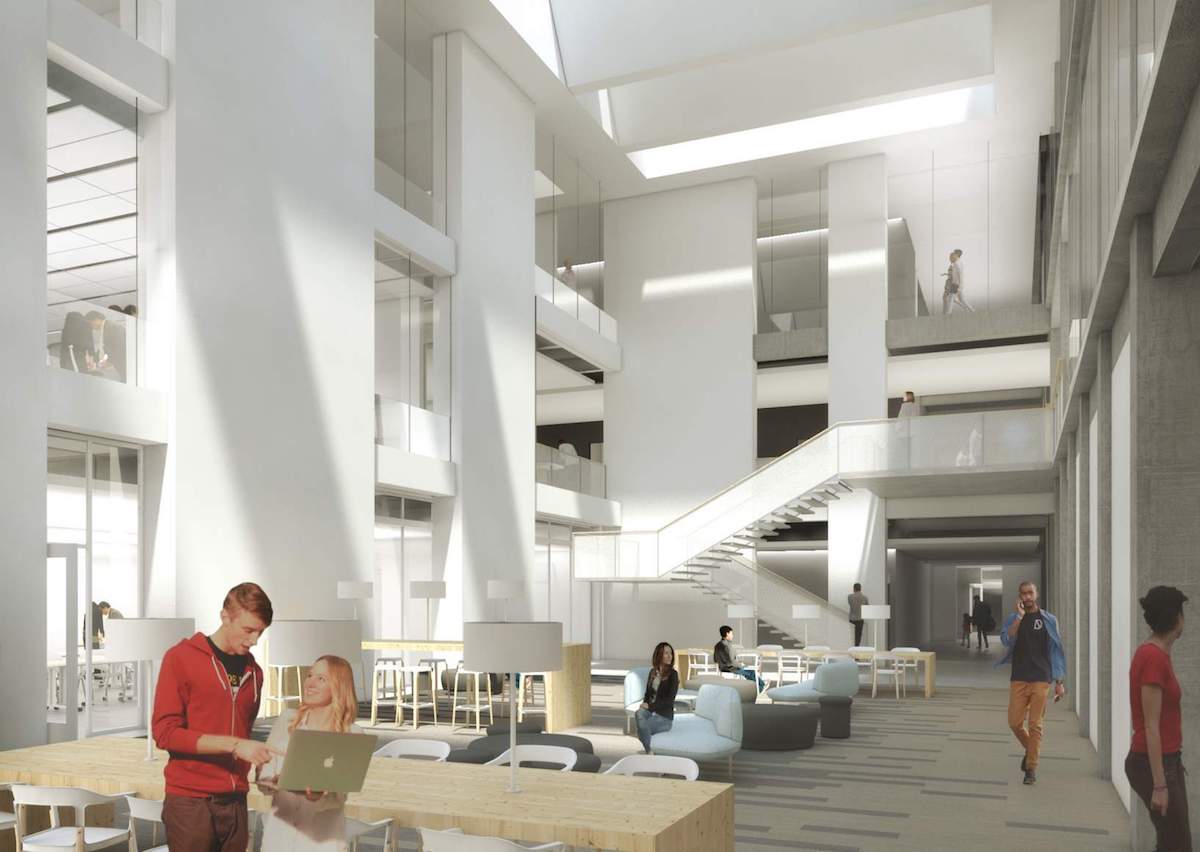 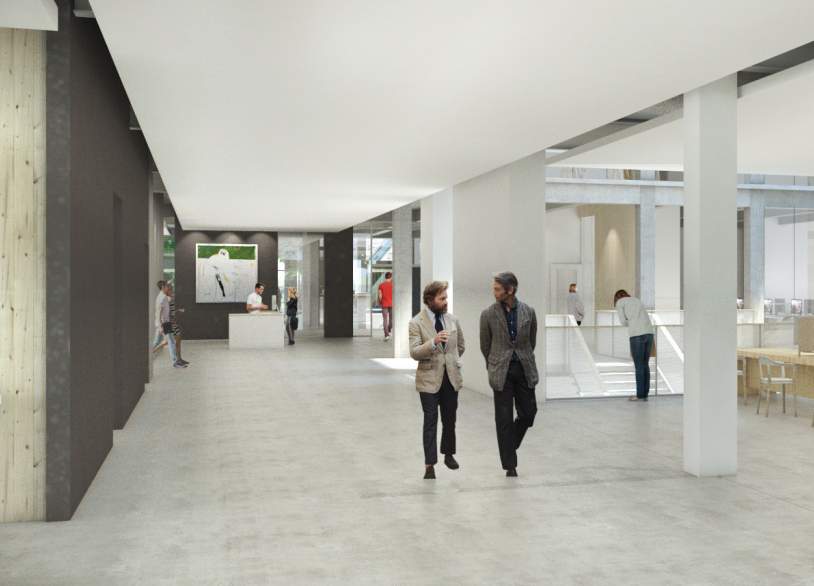 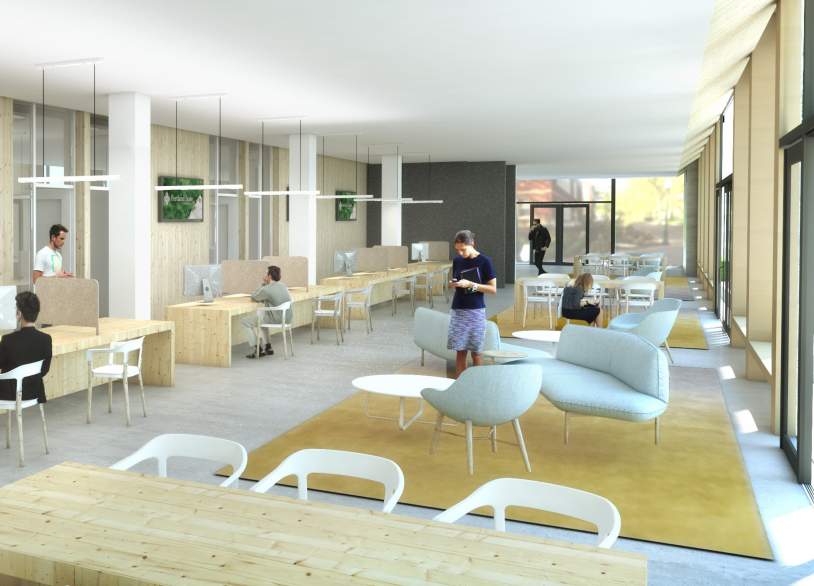 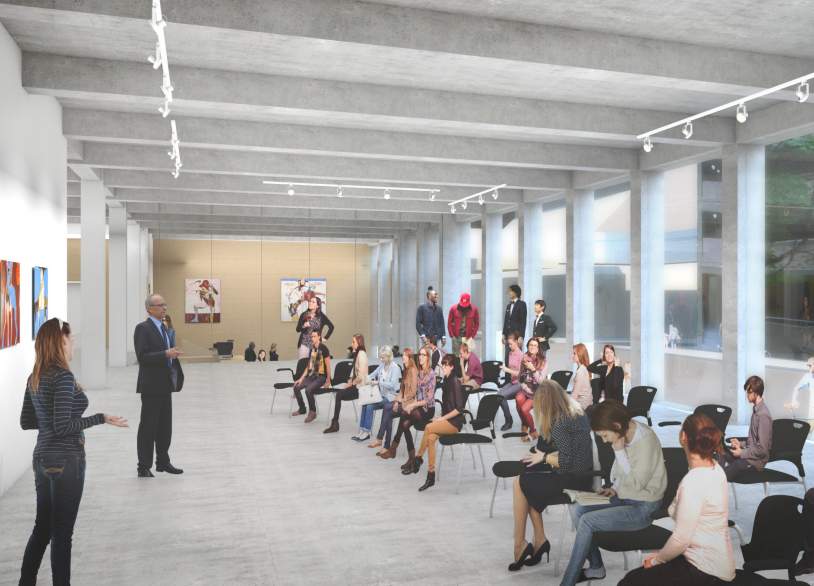 I think your new compositions here, plus what you’re doing on the Broadway side, are fantastic. Tad said it: they all work really well. I think there’s some value in these 1960s buildings as they are. There’s some terrible things about them, but they’re from their time and there’s some really good things about them too. I think the Broadway side is a very thoughtful intervention into an existing building, keeping some of the bones in it and some of the aesthetics, but also opening it up and doing some of the things that it should have done in the first place, but didn’t because we weren’t thinking about architecture in the same way. I think the Broadway side is incredibly successful. I can imagine the cost of that big move, but I think it’s the right big move.

On the other side, I there’s also a certain quality in the 1960s architecture with the curtain wall and the bookends… but it’s leaking, and it’s probably not the best curtain wall system. So I think what you’ve done here… is somewhat harkening back to this type of architecture, it’s got some of those elements, it’s somewhat a ’60s building. I could see this being in Brasília. It’s got those qualities, and I think it’s very successful.

In order to gain approval the project will be required to go through a Type III Design Review with public hearings in front of the Design Commission. 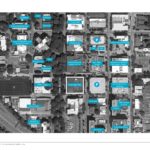 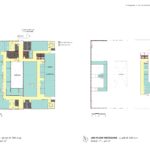 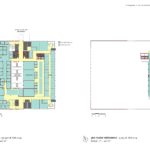 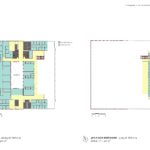 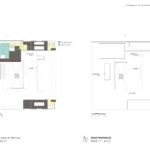 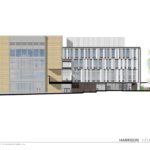 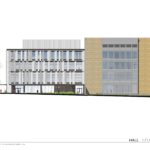