Permits are under review for a new multifamily project at 4008 SE Division St, which will have 10 units in a 3-story building.  The building design is by Orangewall Studios.  Exterior materials include fiber cement siding and stucco.

An Adjustment Review was approved [PDF] by the Bureau of Development Services, to reduce the width of pedestrian walkway from the 6′ normally required in a commercial zone. Six written responses in opposition were received. The approval was based on a finding that 5′ is all that is required in multi-dwelling zones, and that the project is not proposing any commercial uses that would require the extra width.

The site is currently a vacant lot, with single family houses abutting the lot on either the site. The block face is otherwise developed with commercial uses. A single family home on the site was demolished in 2004. 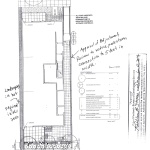 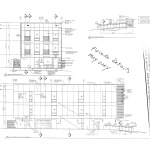 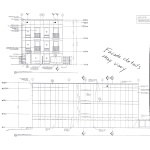