Front 17, a project which will develop 2 acres of vacant along NW Front Ave, is currently going through the Design Advice process. The project will include ground floor retail, an office building, apartments and townhouses.  The design is by YBA Architects for Guardian Real Estate Services. 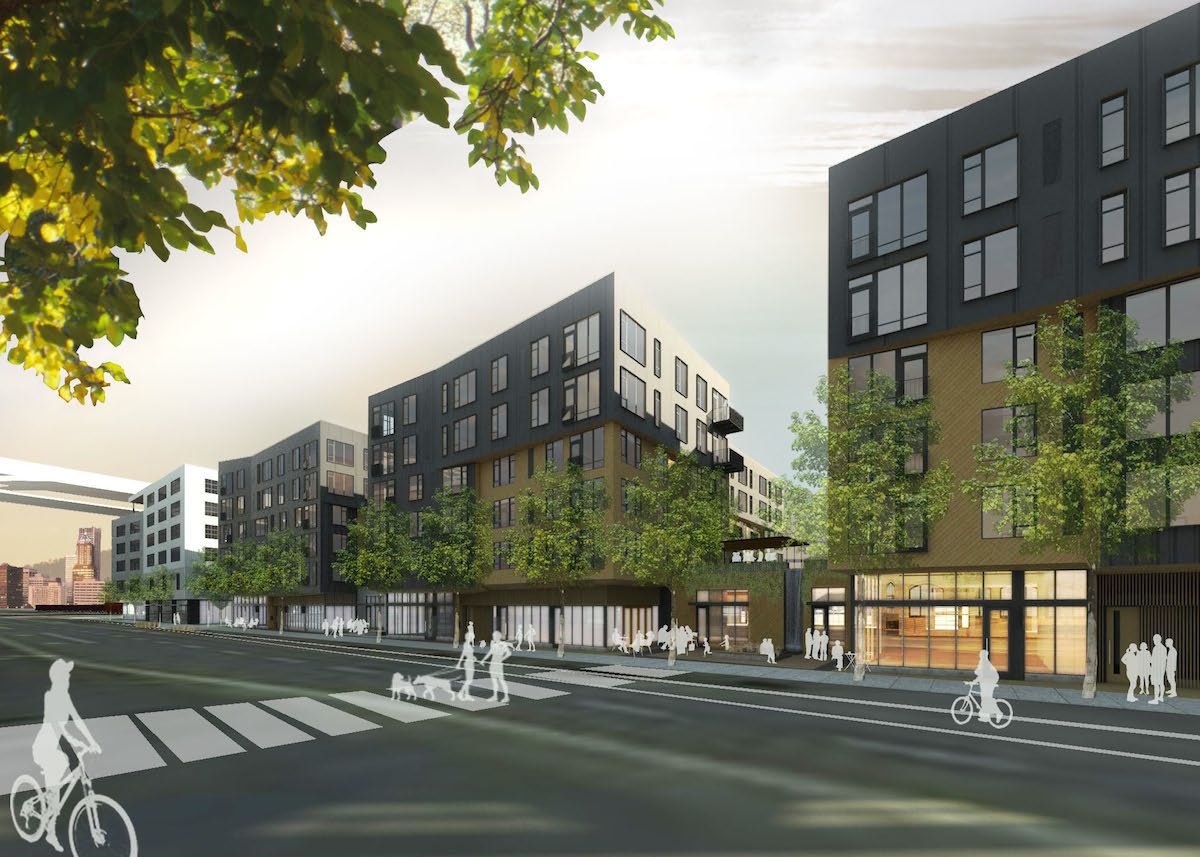 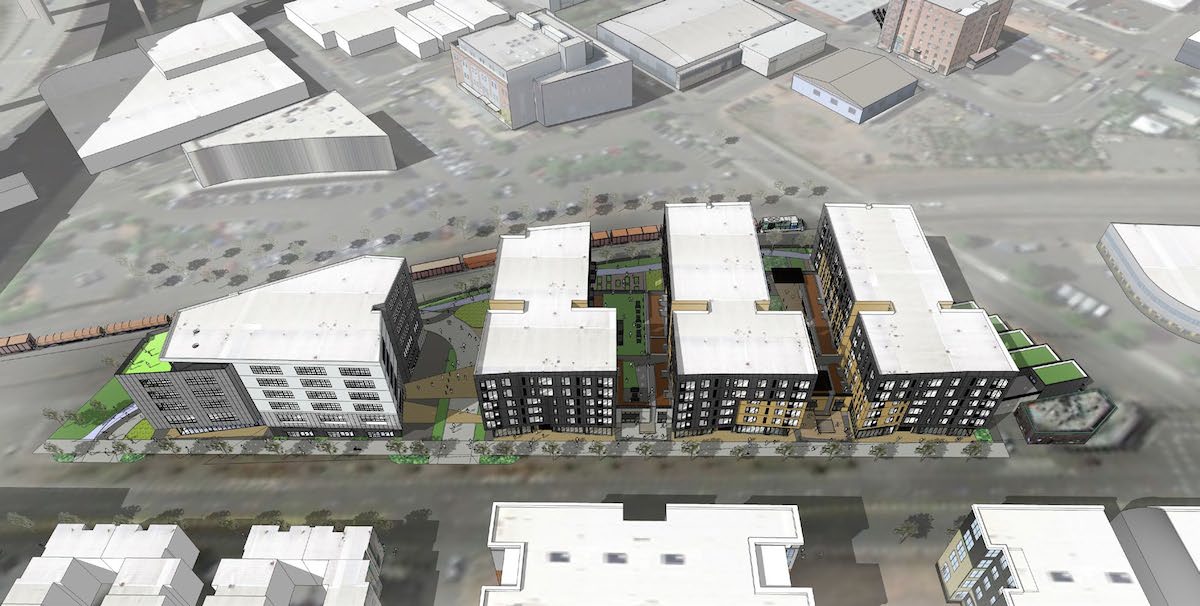 The massing of the project is intended to recall warehouses which formerly hung over the Willamette. The northern building is composed of three distinct apartment volumes over a retail and parking podium. Amenity courtyards for the residents are proposed above the podium.  The southern building will have 5 floors of office space over a retail space, currently proposed to be occupied by an urban winery. 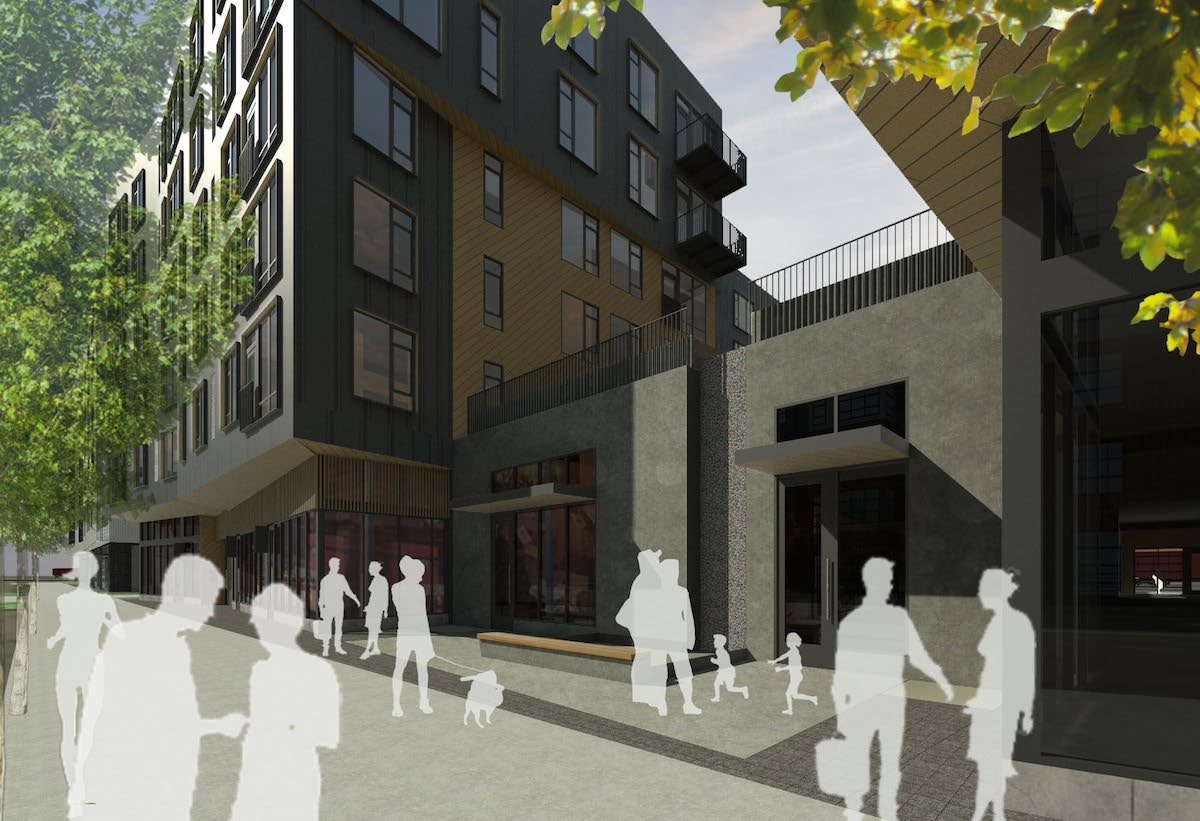 The multifamily buildings will have a skin of graphite grey standing seam metal. This is then visually peeled away at key points to reveal a lighter material, set a 45 degree angle, reminiscent of the diagonal wood sheathing used on older industrial buildings. 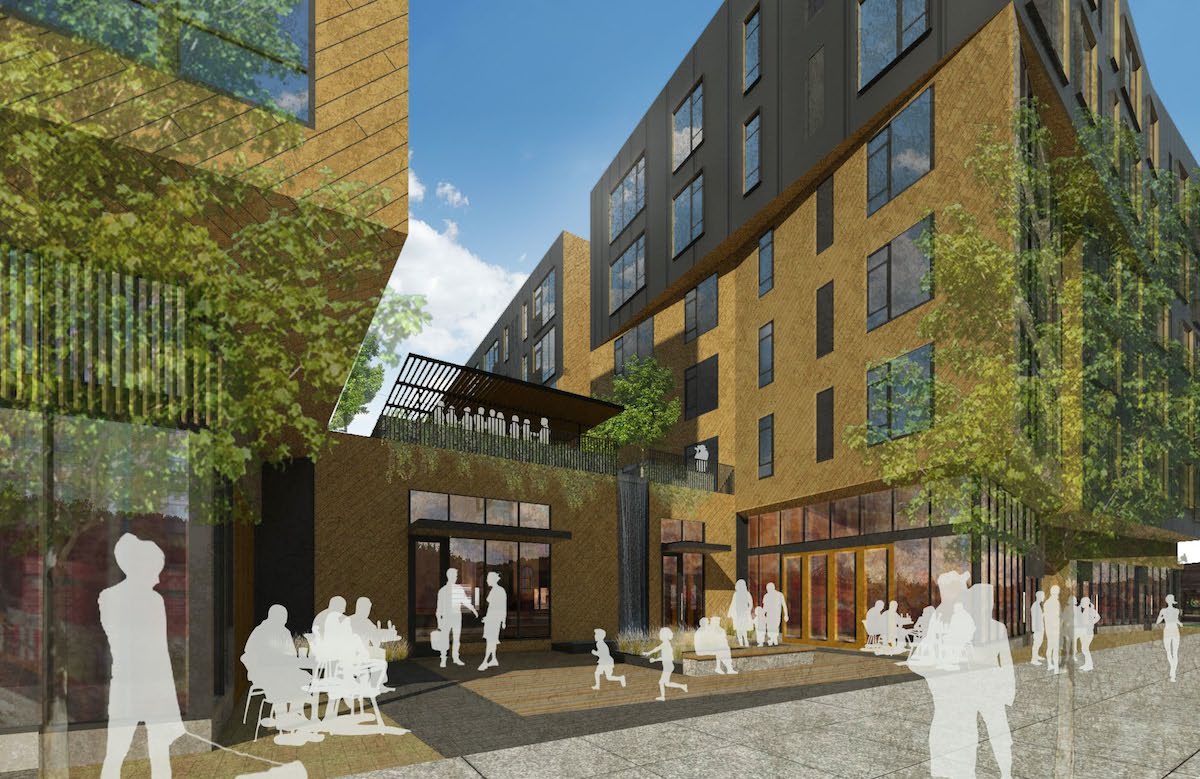 The retail spaces are proposed to have 15-16′ tall ceilings, a generous height which is rarely seen. The retail spaces conceal an above grade parking garage, which requires high ceilings due to its use of a stacked parking system. 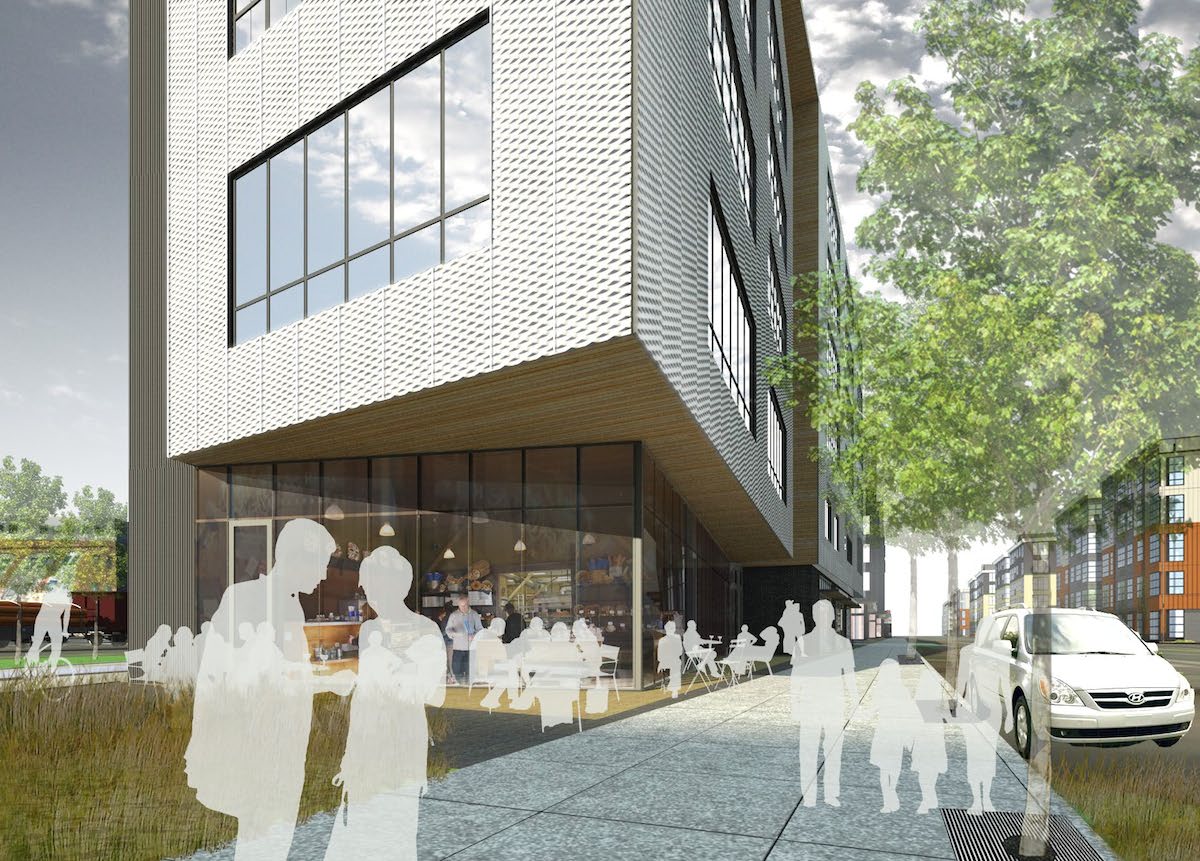 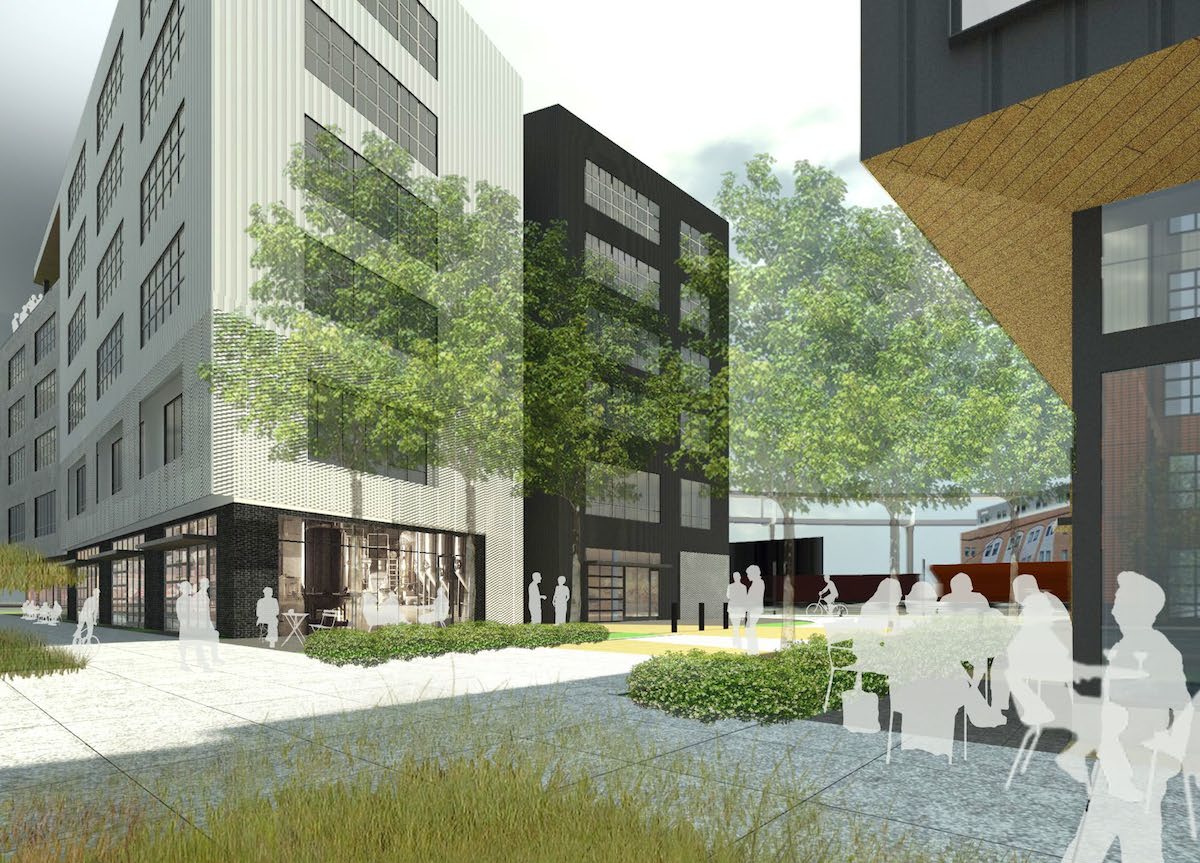 The office building will be clad in light grey rolled metal siding and expanded metal lathe siding.  Ironspot brick will be used at the ground level, with cedar at the soffits. 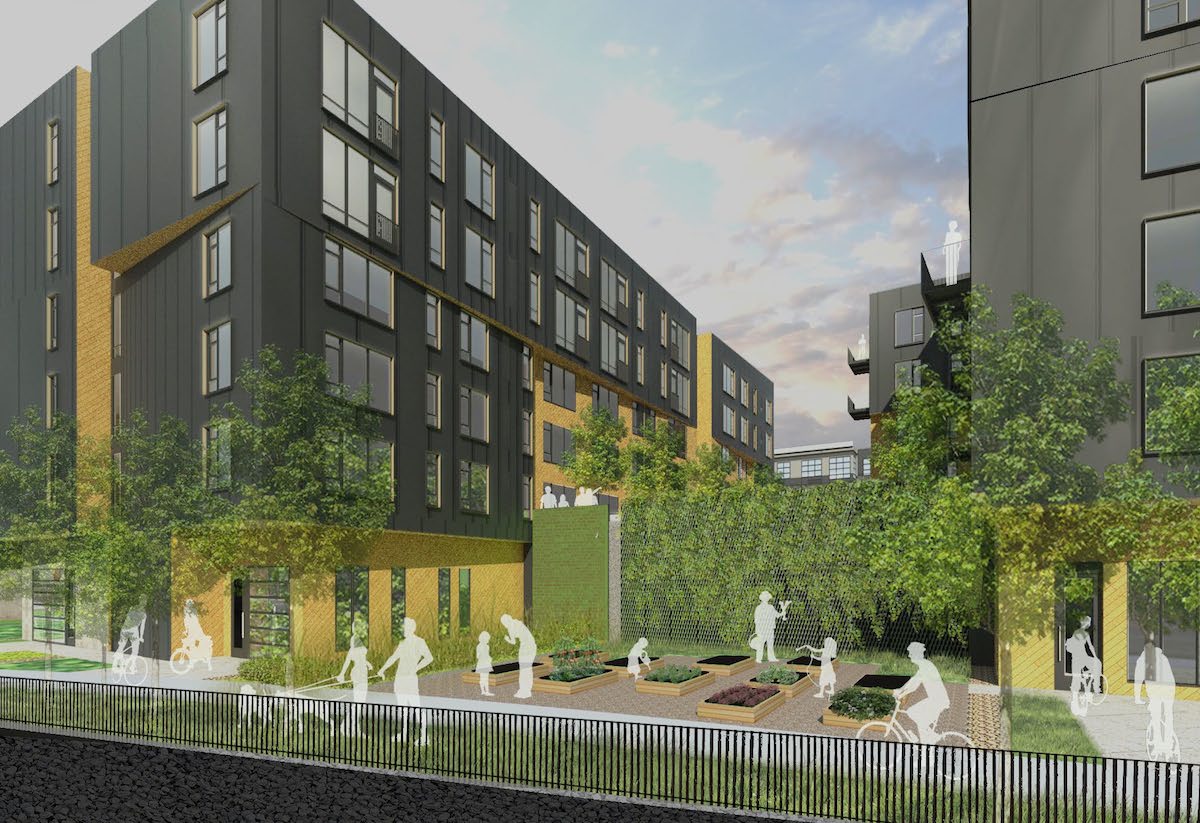 At the rear the site, adjacent to the railway, a new bike path is proposed in the Terminal Street right-of-way. This will form a shortcut between NW 17th Ave and NW Front Ave. 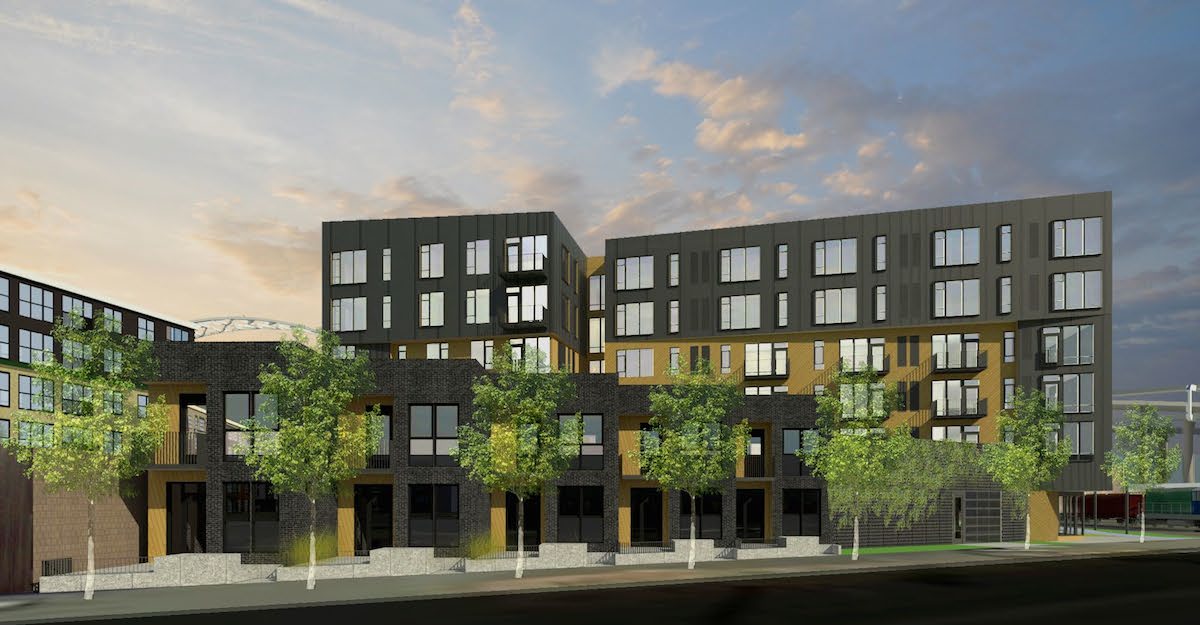 The Design Commission is scheduled to offer Design Advice on Thursday, January 14th. The applicants may then return for further Design Advice, or apply for the required Type III Design Review.

Front 17 will be located on a sliver of wedge of land between the railway line and NW Front Ave. The site is currently vacant, and has never been intensively developed. In 2013 the site was rezoned from Heavy Industrial (IH) to Central Employment with a Design overlay (EXd). The decision [PDF] by the Hearings Officer was uncontested. Two narrow warehouses, built in the 1950s, previously existed on the site; these were demolished in 2014. The only other building on the block is the Dockside Saloon, which is located outside of the development area. 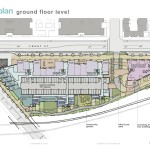 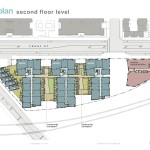