The Design Commission has approved a major renovation and expansion of the PSU School of Business Administration. The project design is by the Boston office of German firm Behnisch Architekten, with local architects SRG Partnership and landscape architects Mayer Reed. The project will involve the modernization and upgrade of the existing building on the south half of the block, and the addition of a new 36,000 sq ft structure on the north half of the block. Between the two will be a new glass atrium, with entrances from plazas on SW 6th Ave and SW Broadway. 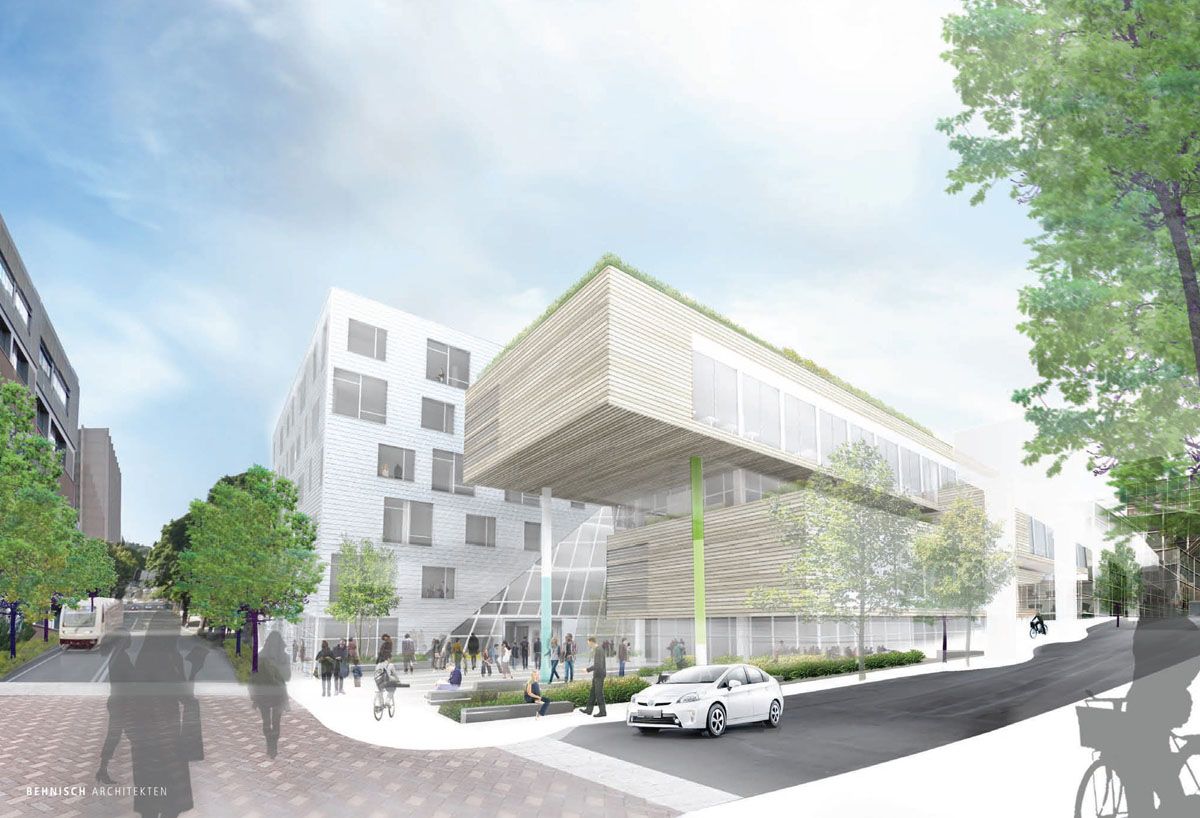 The existing building on the south side of the block was built in two phases. The first phase, at the west, was built in 1981 and is currently occupied by the School of Education. The second phase, at the east, was built in 1989, and is the current home of the School of Business Administration. The two phases are internally linked at all floors. As part of the renovation the buildings will be stripped to the primary structural frame, and all exterior cladding materials will be replaced.

The addition is conceived as a series of stacked trays, that float above the ground plane. The trays will contain new classroom space, with exterior rooftop terraces at three levels. The trays will be clad in an untreated Alaskan yellow cedar, which will be allowed to turn gray over time. 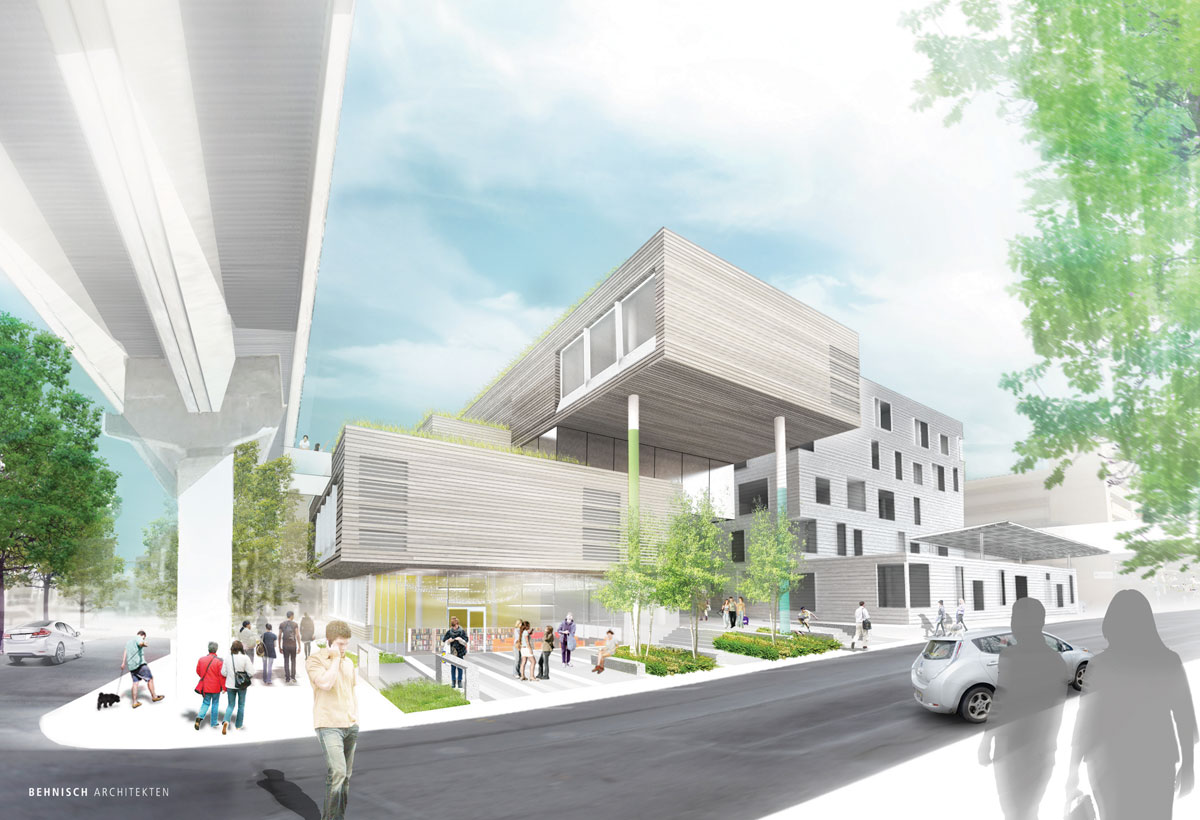 The existing building will contain classrooms, office suites, admin areas and student break out rooms for the School of Business Administration. The top floor will be used for the Office of International Affairs. At the ground level three new retail units will be added along SW 6th Ave. The building will be reclad with a chrevron pattern metal panel system, where each fold in the metal will be 6″ to match width of the cedar cladding on the addition. New punched openings windows will be added to the building in a non-uniform patternm, marking a major change to the existing building, which has large expanses of blank walls. 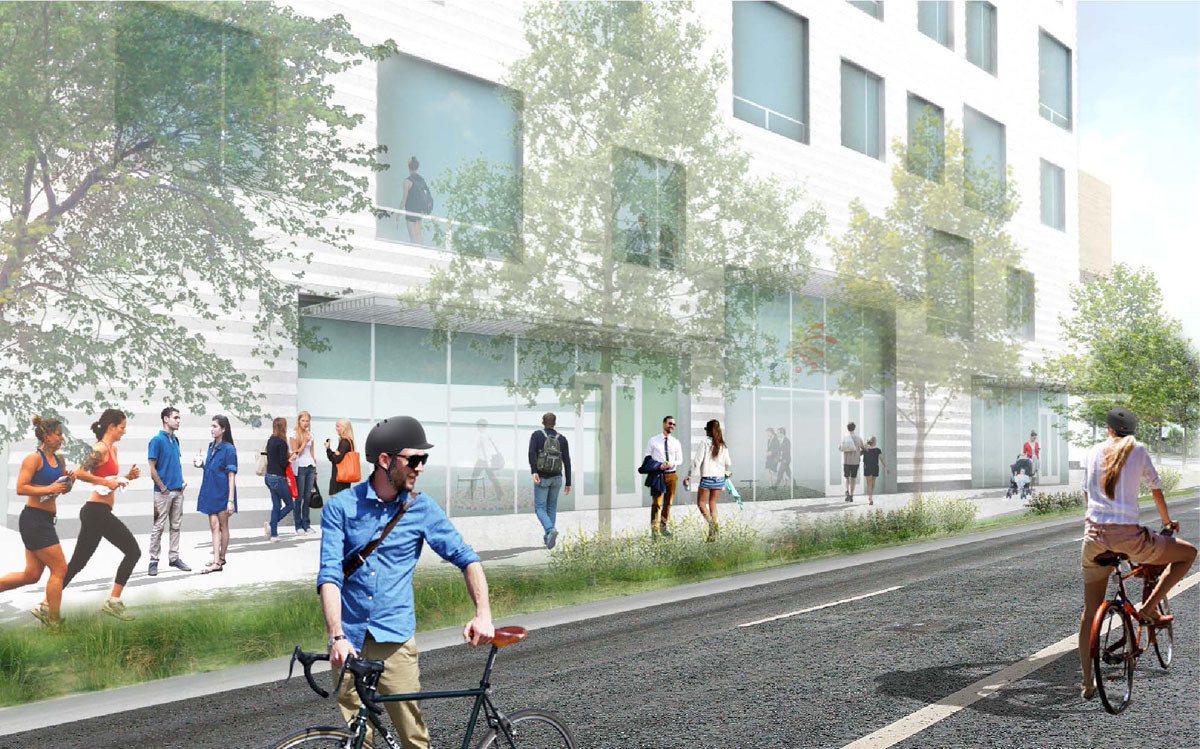 In between the addition and the existing building will be a full height glass atrium. The ground material from the exterior plazas will continue into the building at the floor of the atrium, and a grand stair with event seating will link the two main entrances on SW 6th Ave and SW Broadway. At the upper levels a series of bridges and staircases will connect the classrooms in the addition to the main body of the building. 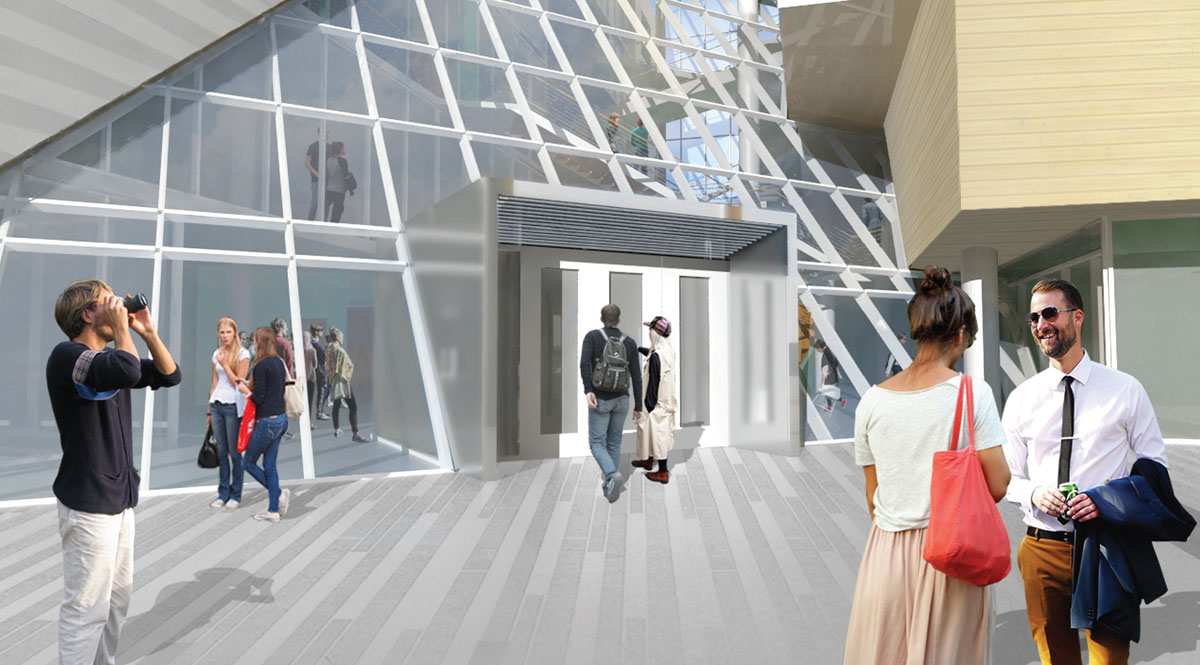 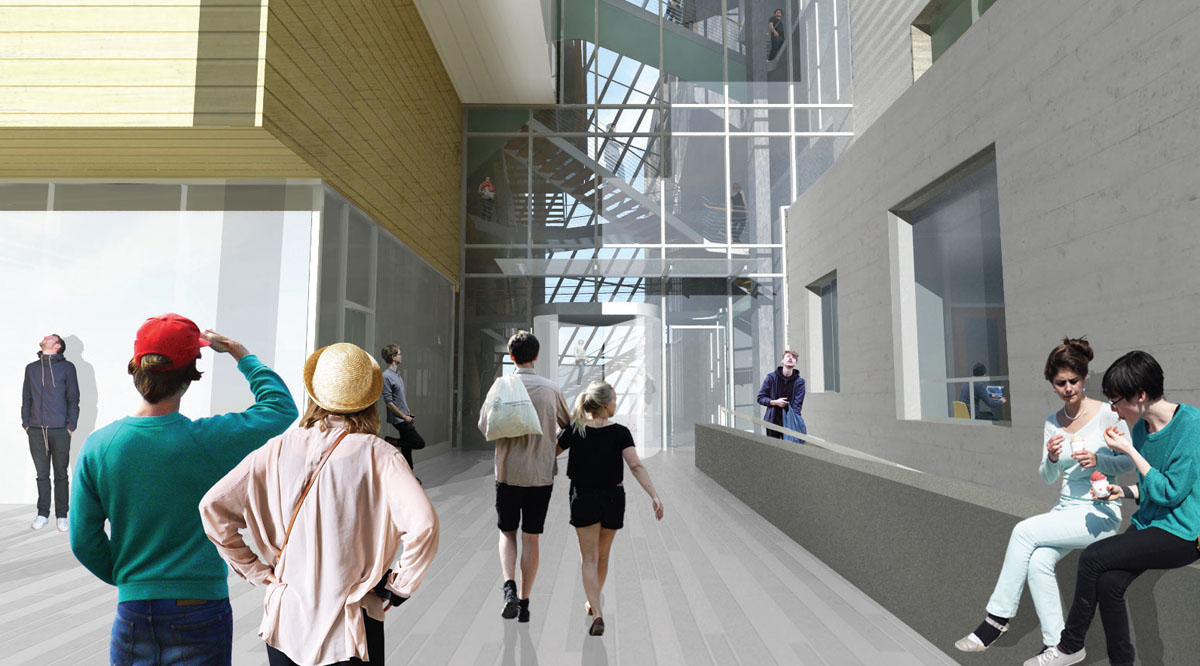 The existing building is linked to the PSU skybridge network on both SW Montgomery St and SW Harrison St. The skybridges are used by the university to provide ADA access to some of its older buildings, as well to carry utilities including chilled water and steam. The new building will continue to be connected to the skybridge network at both points, though 107.5 linear feet of existing bridge will be demolished at SW Montgomery St. This will be replaced by a new 7′-6″ long connection, which is still subject to final approval by the City Council. 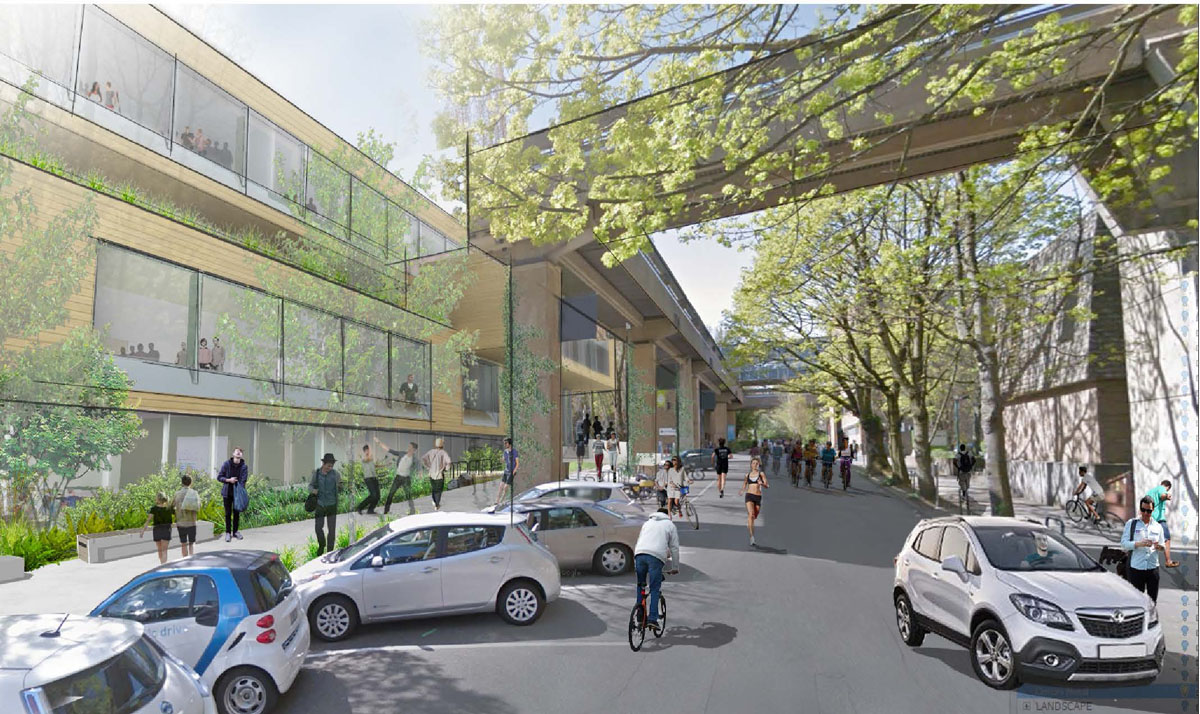 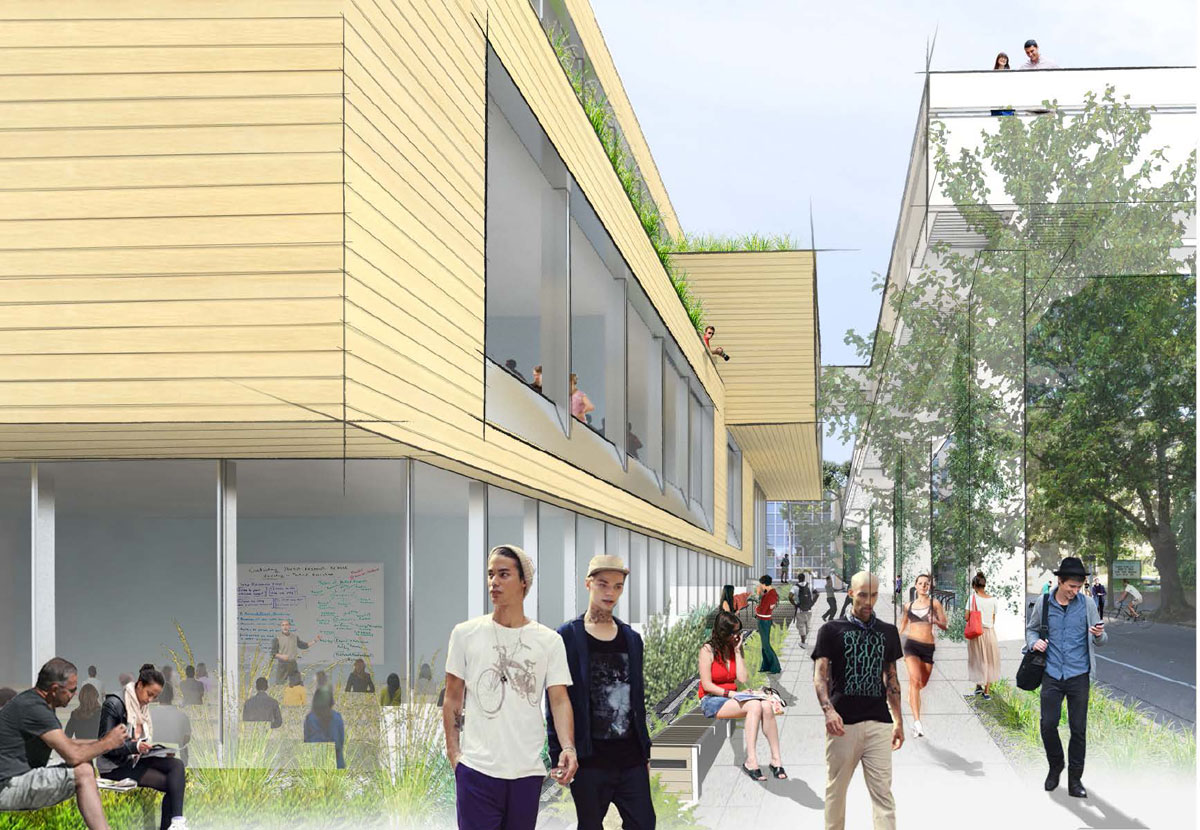 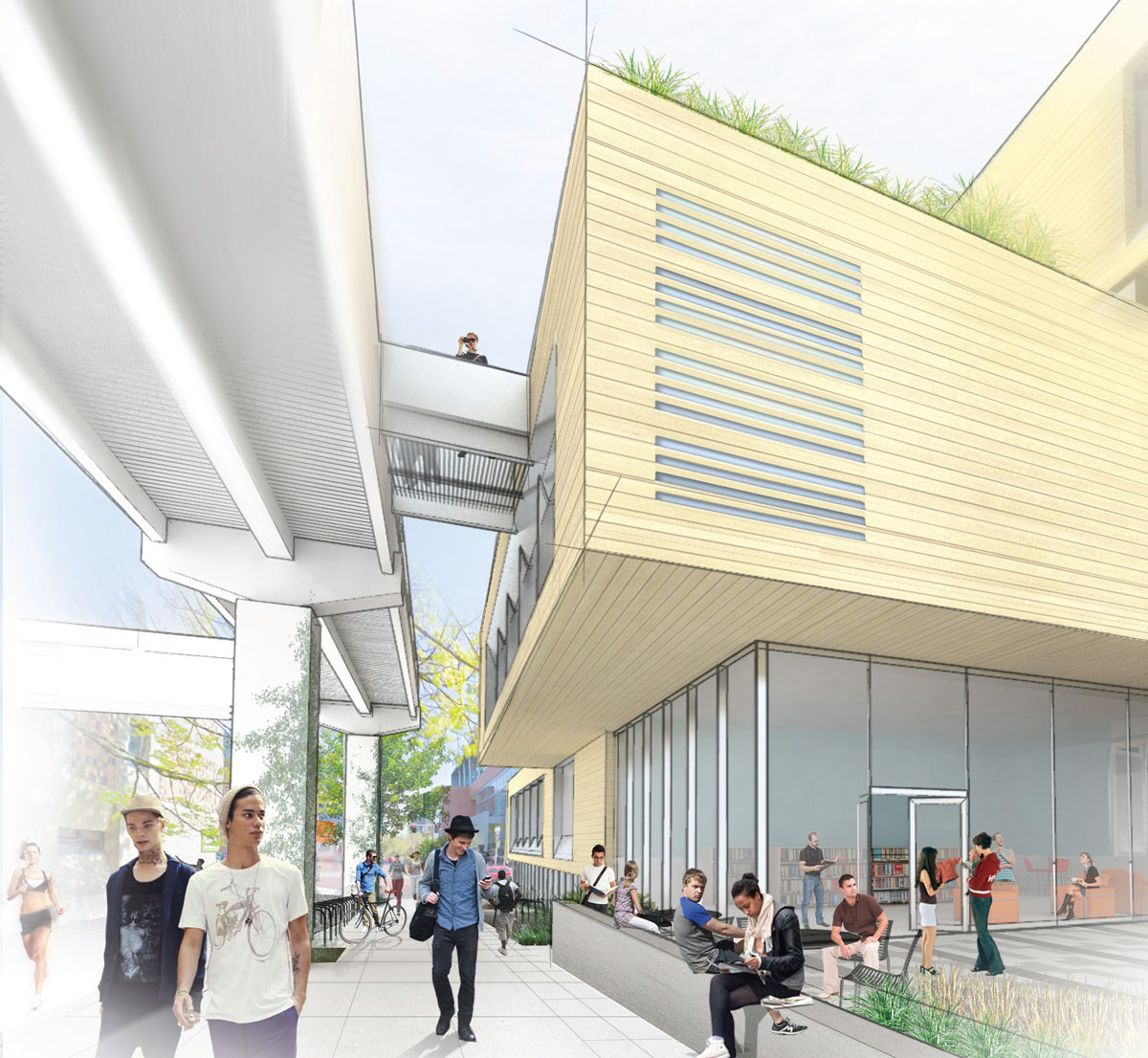 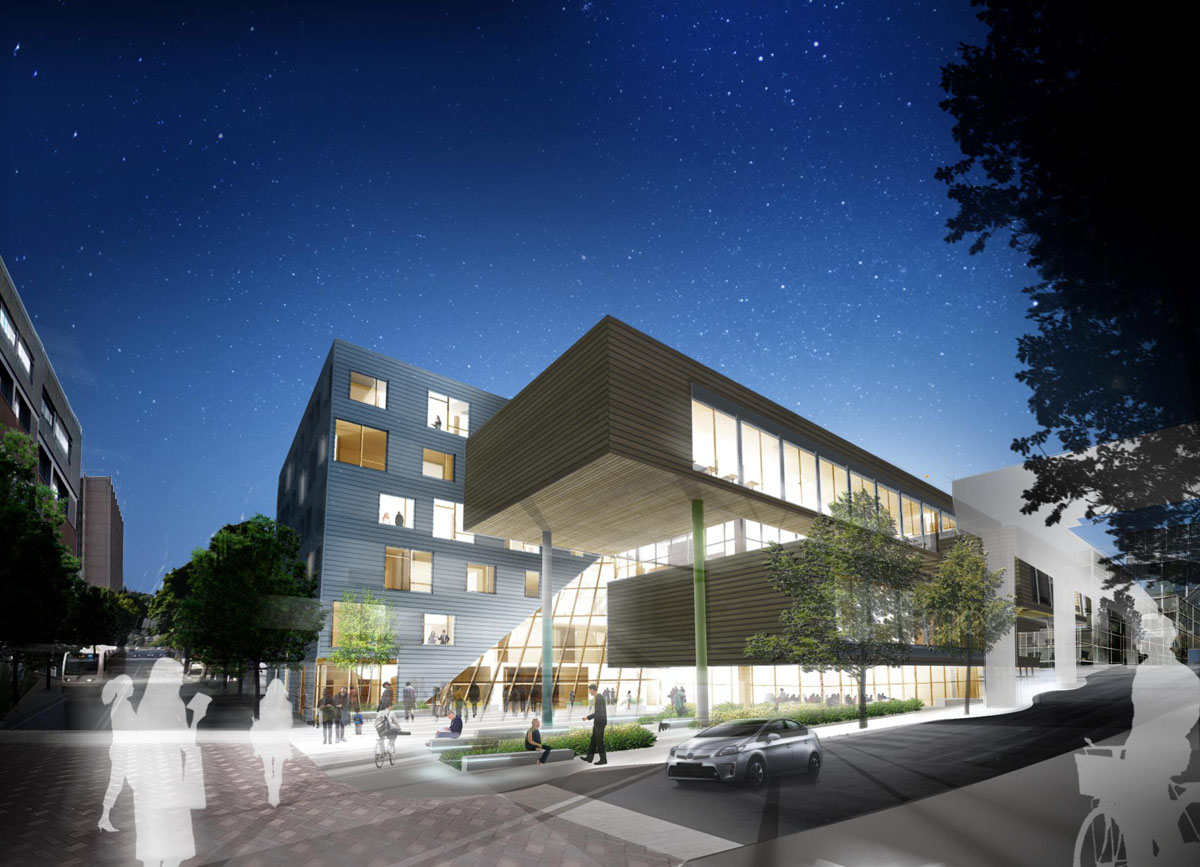 The renovation and expansion of the School of Business Administration was approved through a Type III Design Review on August 6th, 2015. In the Final Findings and Decision by The Design Commission [PDF] the project was found to meet all the approval criteria.

The design review process exists to promote the conservation, enhancement, and continued vitality of areas of the City with special scenic, architectural, or cultural value. Per findings described in this Staff Report and Recommendation, Staff finds that the Applicant has sufficiently responded to all concerns raised by Commission at the land use hearings. Most significantly, pursuant to Design Commission comments the ground floor program now orients active use (multi-function space including entries and glazing) to the plaza thereby meeting guidelines B5 and C6 ensuring the success of the projects public spaces. Therefore, this project warrants full approval…

Preliminary work on site has already begun. Building permits for the project are currently under review. 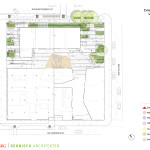 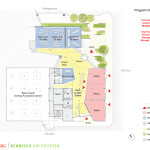 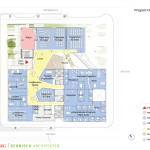 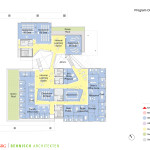 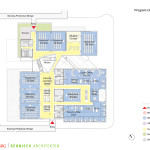 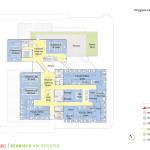 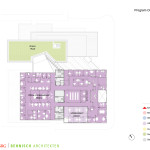 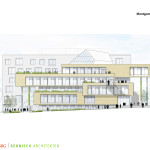 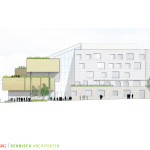 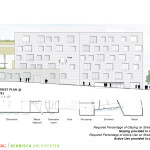 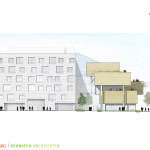 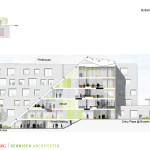