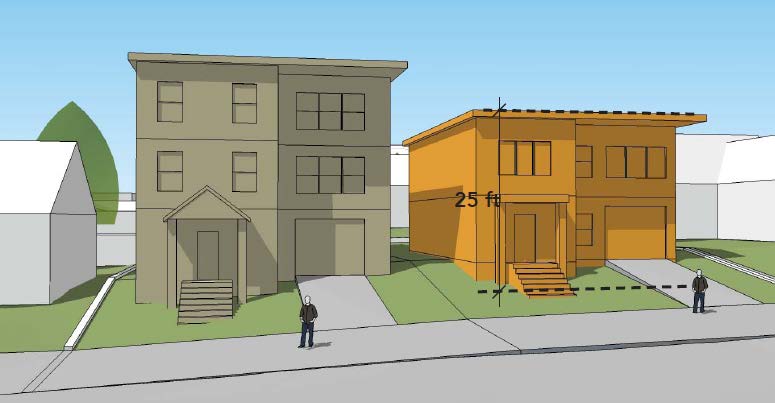 The Residential Infill Project has released recommendations for changes to the zoning in Portland’s single family residential zones. One of the proposed changes is reduced the allowable height of flat roofs from 30′ to 25′.

The Portland Business Journal wrote that jazz club Jimmy Mak’s has found a new home, with an exterior courtyard. The Pearl District bar is relocating to make way for the Modera Davis apartment building.

The Business Tribune reported that work is beginning on the Design Overlay Zone Assessment project. As Portland gets ready to expand the number of areas covered by Design Review it has asked consultants to perform an independent, comprehensive assessment of the city’s design overlay zone.

Work is about to begin on the Broadway Tower, according to the Portland Business Journal. The 19 story tower will include a Radisson Red hotel and 175,000 sq ft of office space.

Details of the $258.4 million affordable housing bond that will be on the November ballot were published in the Portland Mercury.

Portland is seeking feedback on the Residential Infill Project, and is holding a series of open houses. An online open house will accept comments until August 15th 2015. A letter to the editor the Portland Chronicle was critical of the project, and argued that the City is “failing its promise to the majority of its citizens”.