This is an updated version of a post originally published on August 31st, 2016.

Construction is underway on a mixed use tower at NW 14th & Glisan. The 16 story, 174′ tall building by Ankrom Moisan Architects for developer Holland Partner Group will include 230 residential units and 6,359 sq ft of ground level retail. A property tax exemption approved by the City Council in 2016 will allow for 20% of the units in the building to be affordable to households earning no more than 80 percent of median family income. 4 levels of below-grade parking will provide room for 206 vehicles and 362 bicycles. 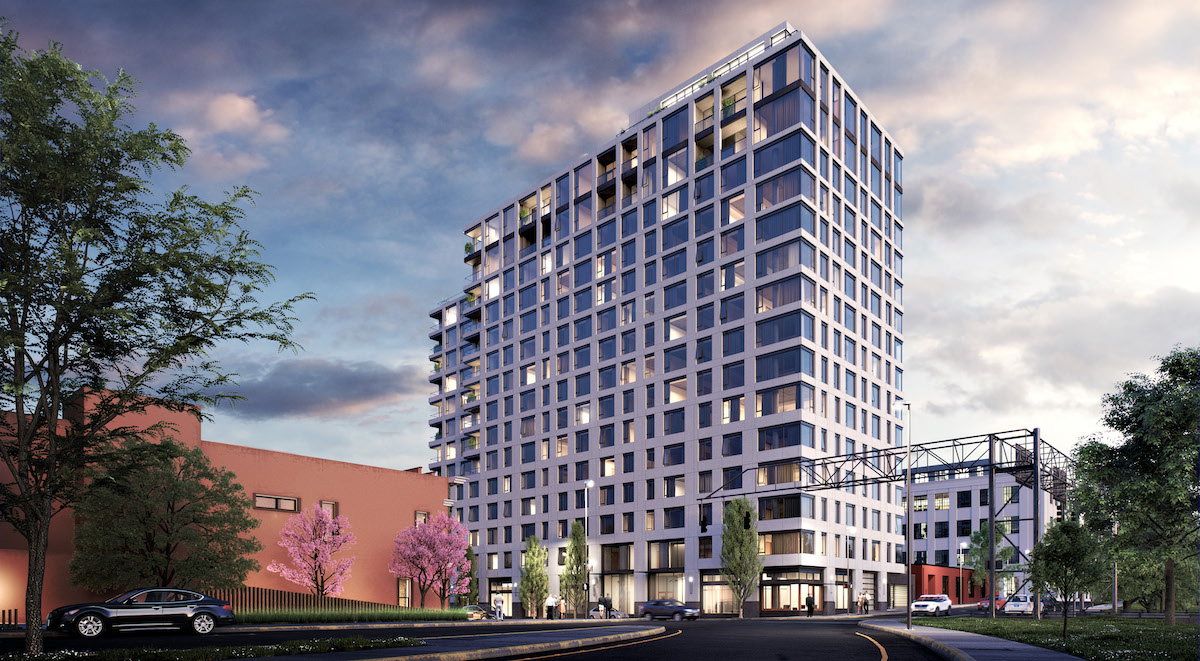 The half block site at 1430 NW Glisan St was most recently occupied by a strip mall built in 1983. Retailers at the site included Audio Geeks, City Laundry Northwest / Pearl District Cleaners, and Fast Signs. The developer gained additional Floor Area Ratio allowance by transferring FAR from a surface parking directly to the north. The parking lot was formerly in the same ownership as the Premier Press building, which was previously planned to be significantly expanded and remodeled as part of the 1440 Hoyt project. That development was cancelled when the Premier Press building was sold to Mill Creek Residential Trust, who intend to construct the Modera Glisan on the site. The surface parking is currently being used as a construction staging area, and will ultimately be developed as a pocket park. 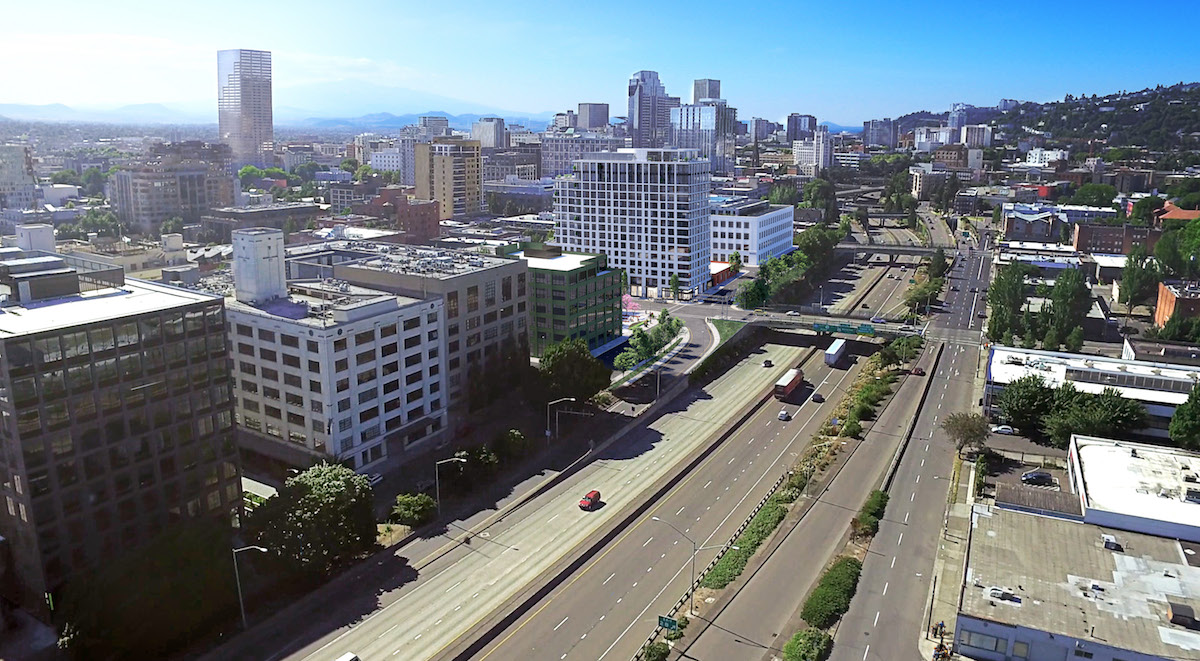 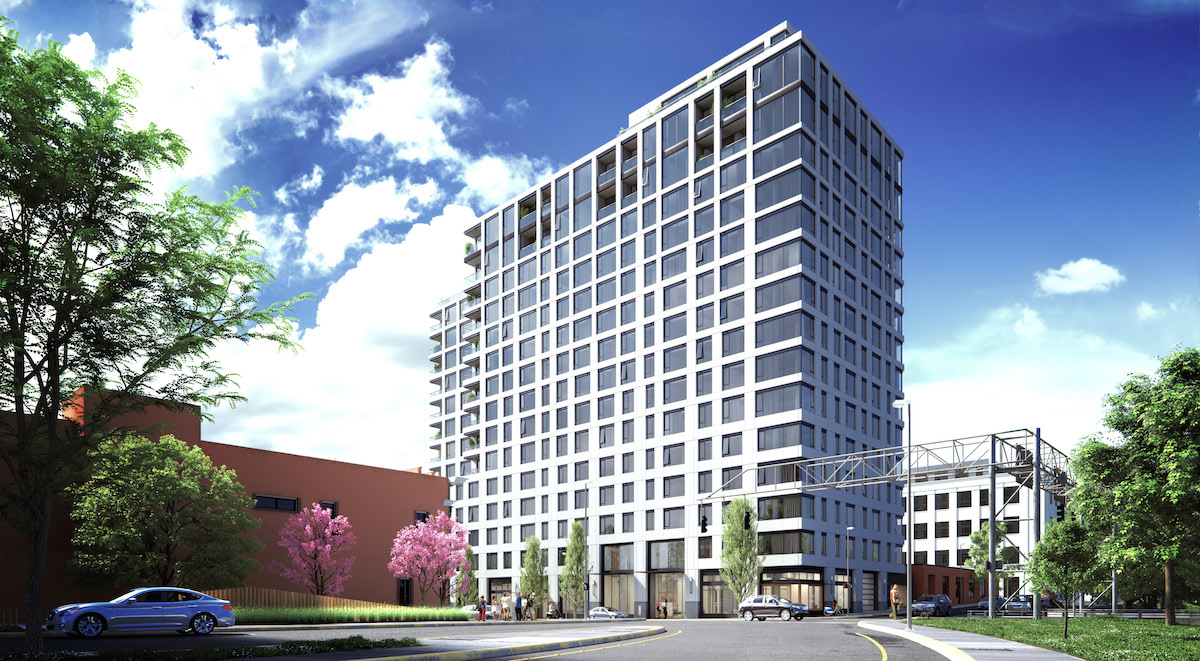 The 16 story building is conceived a solid base that responds to the warehouses at the western edge of the Pearl, which gradually transitions into a glassier tower form as it rises. Since the first Design Advice Review hearing the massing has been broken down at its eastern edge, near the 13th Avenue Historic District, in order to respond to a purpose statement in the Zoning Code that encourages “step downs to historical districts”. 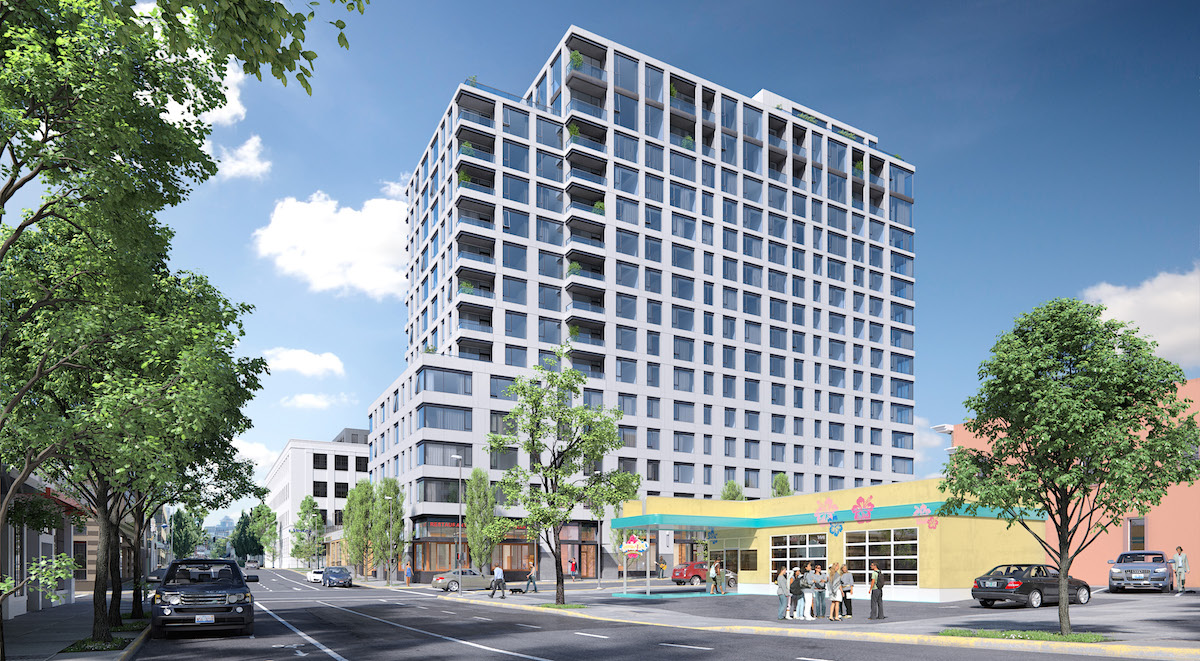 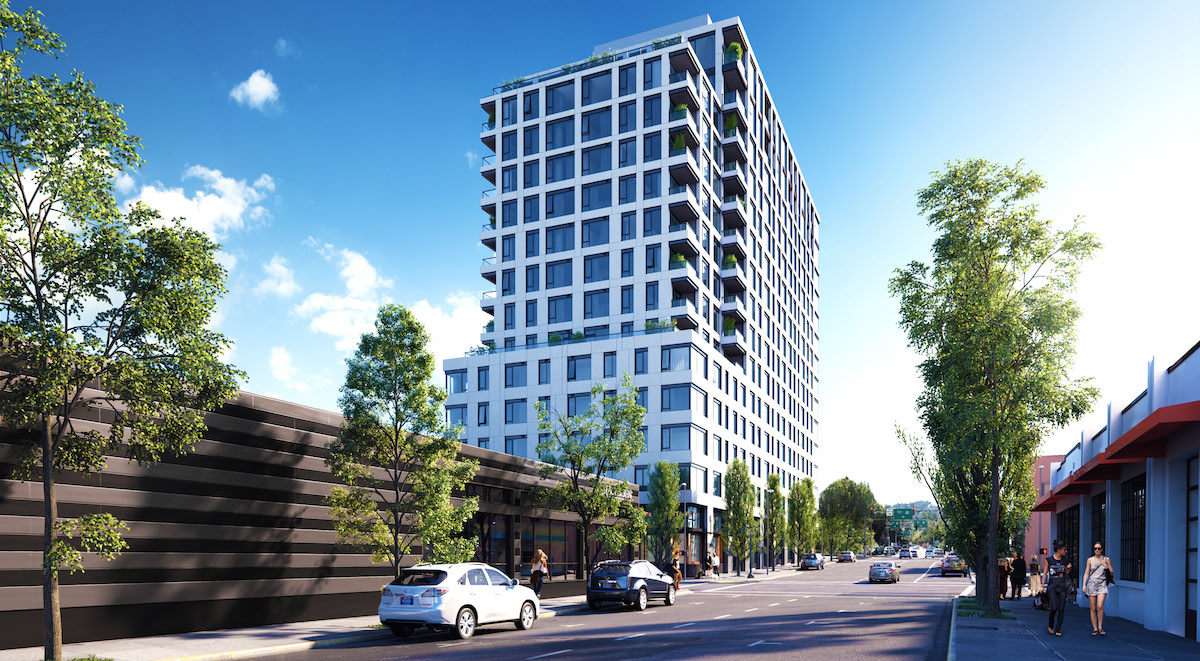 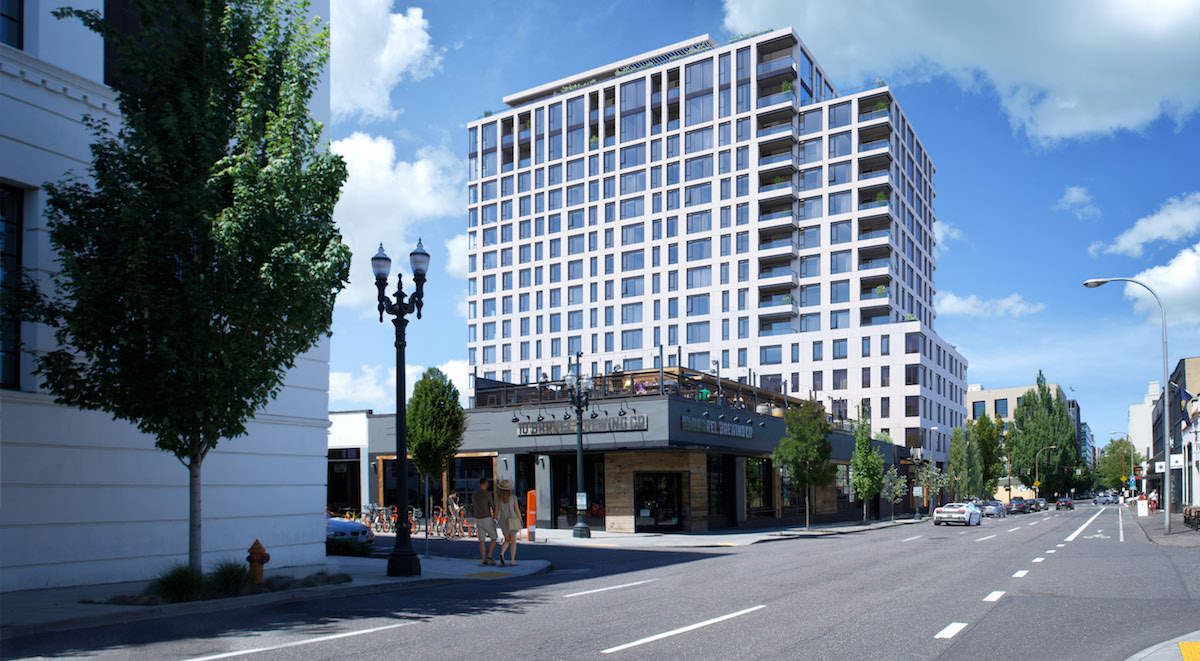 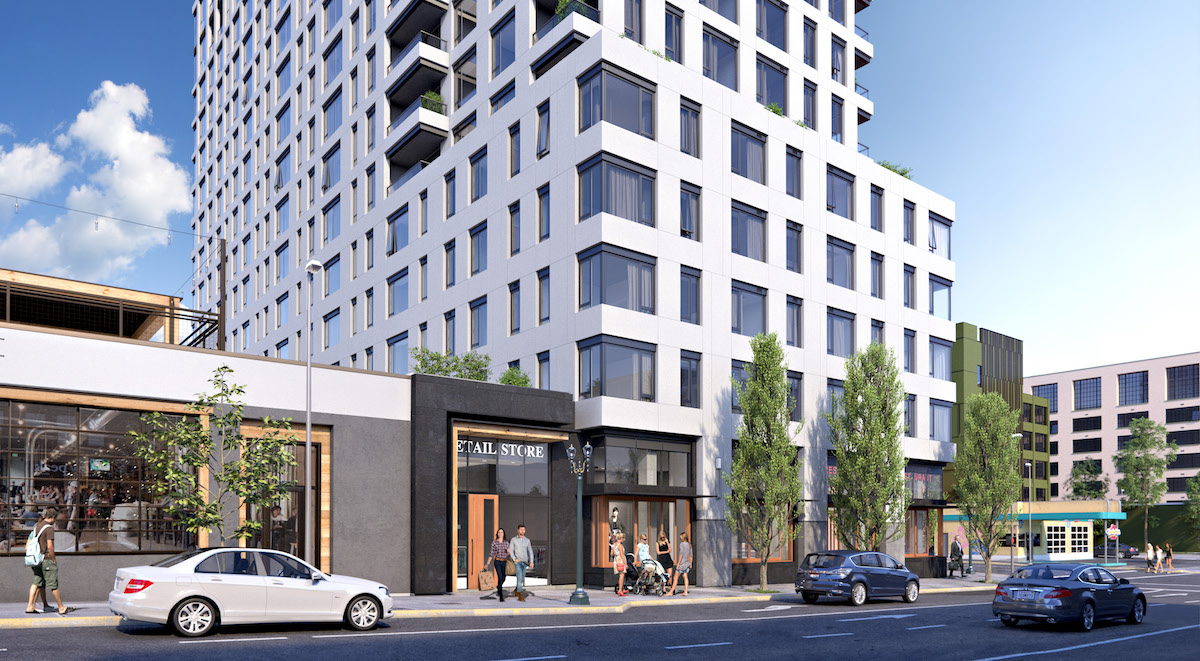 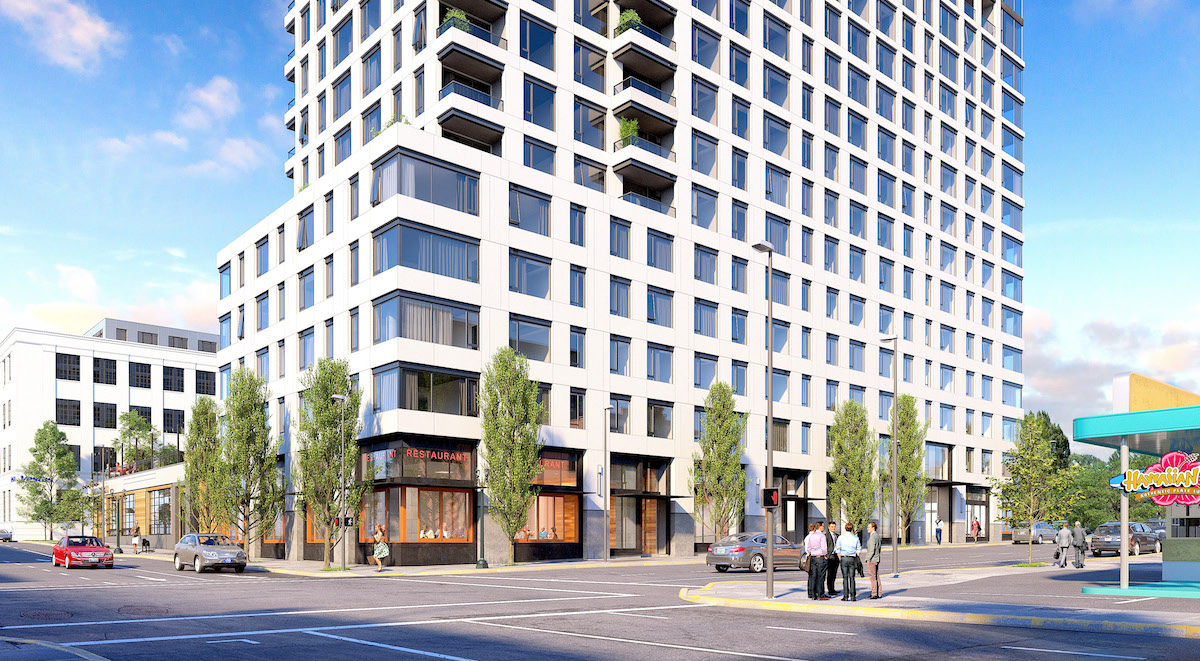 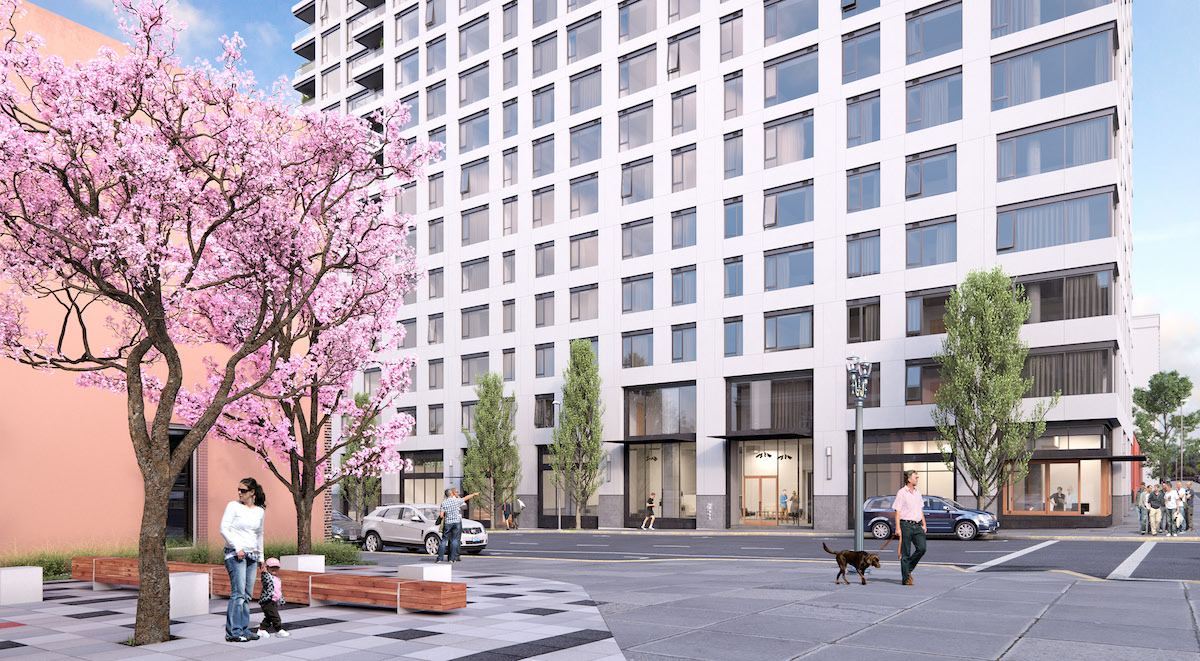 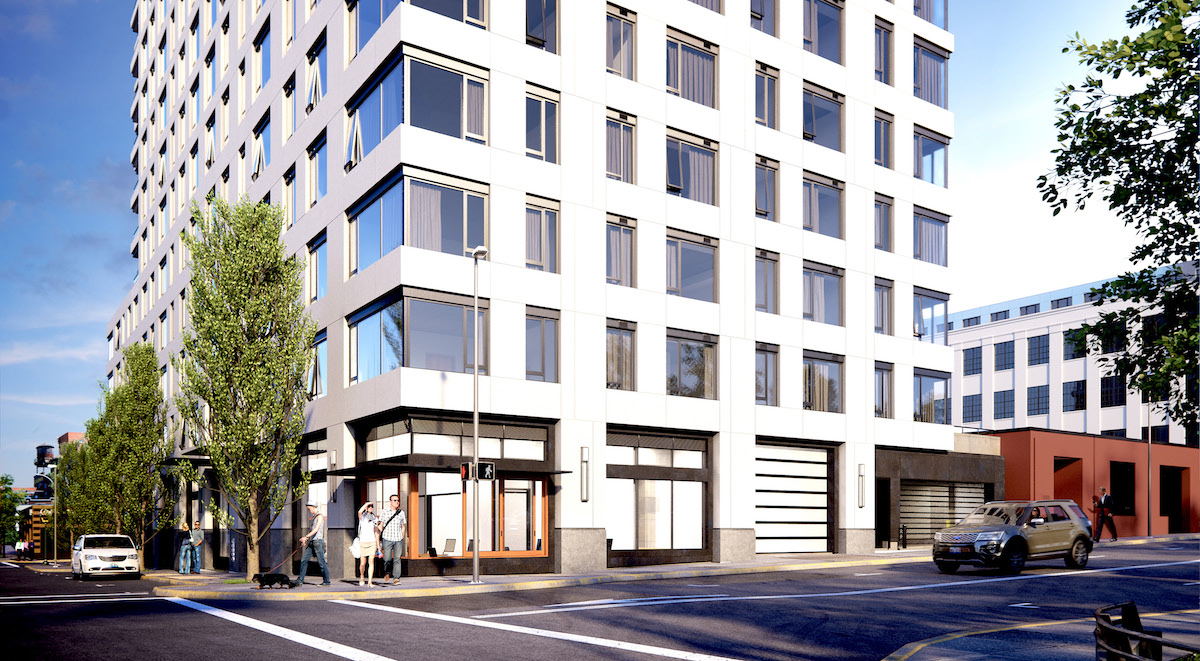 The 16th floor will be used entirely for amenity functions. An indoor amenity area will have floor to ceiling glazing, with views to the south, west and north. A wrap around terrace will offer views in all directions. 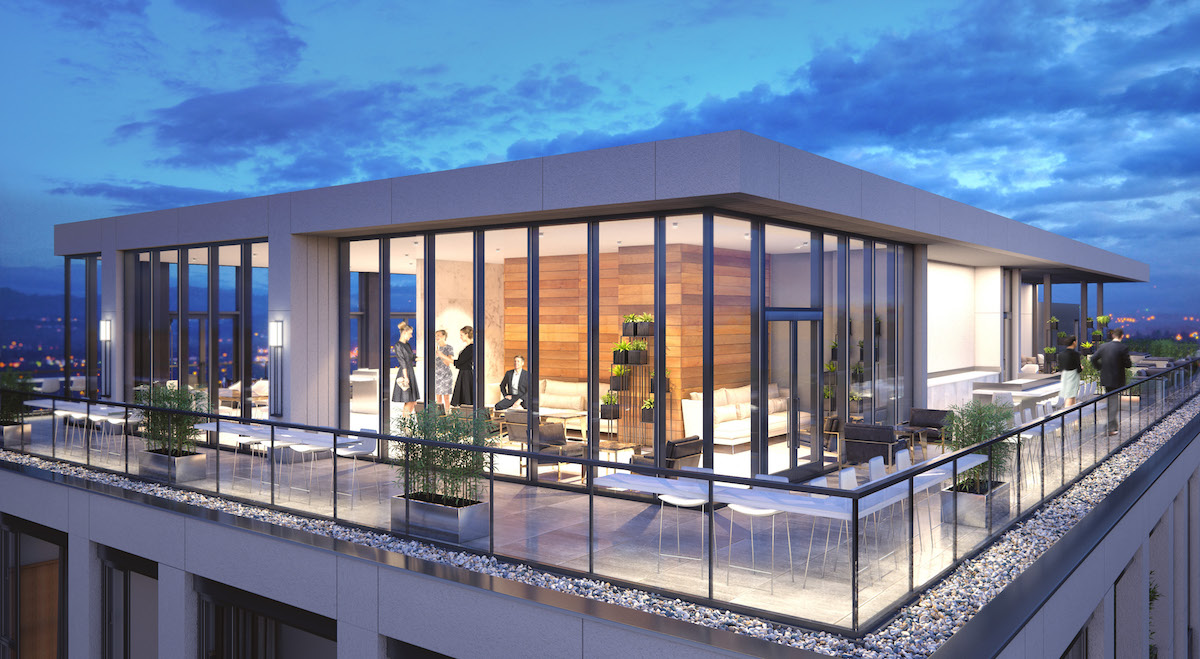 The former parking lot across NW Glisan will be converted into a parklet, designed by Lango Hansen. The design includes wood benches, cube benches, bike racks, trees, and a screen fence at the western edge. Lango Hansen are also acting as the landscape architect for the Modera Glisan, which will be built on the rest of the block (by Mill Creek Residential Trust). While the parklet will remain in separate ownership from the adjacent buildings, common design elements will be used on both sites in order to create a cohesive development. 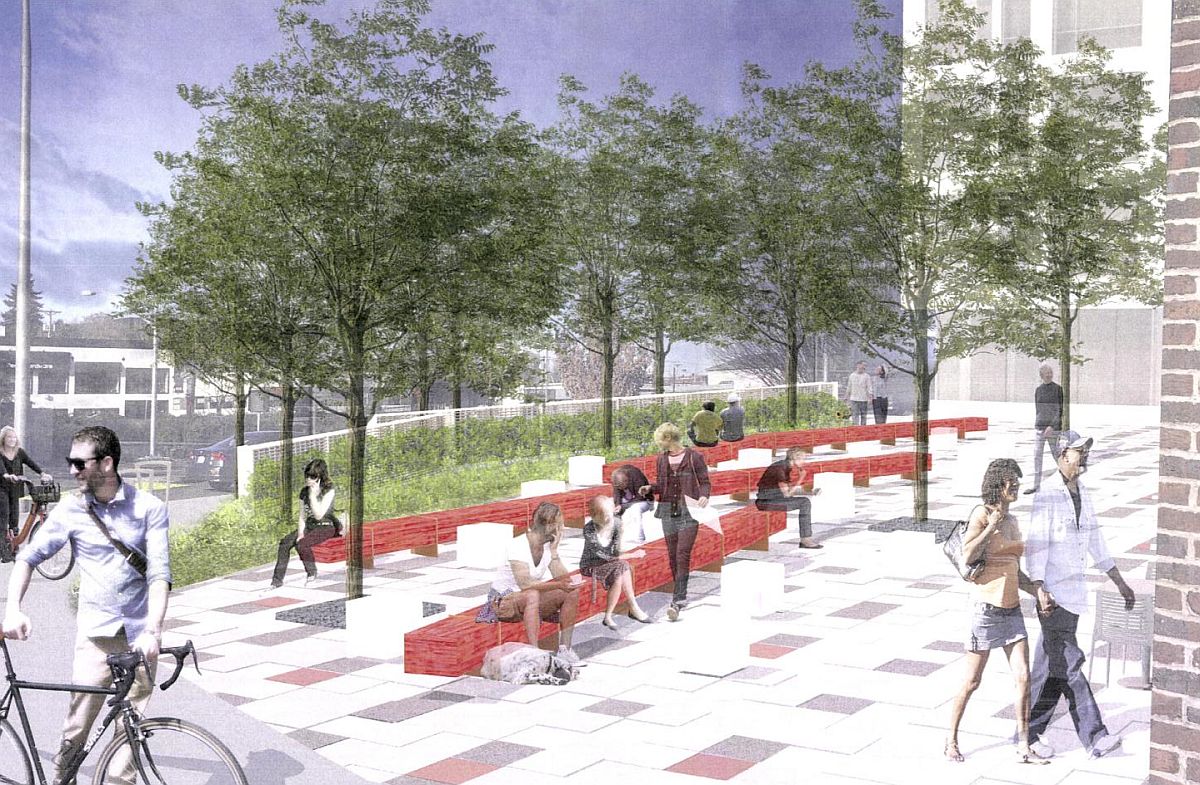 1430 NW Glisan was approved by the Design Commission on August 25th 2016, following previous Design Advice hearings held in January and March 2016. A majority of the Commission praised the building, noting that it had significantly improved since the earlier iterations of the design shown to them. The sole member of the Commission who objected to the building was Commissioner Savinar, who was concerned about how the unbroken massing at the western edge of the building could reinforce the barrier created by the freeway. In the Final Findings and Decision by the Design Commission the project was found to have a “strong grid vocabulary” with an “upward momentum”:

The proposed building features a strong grid vocabulary that plays off the historic and vintage warehouse typology in a contemporary way. The grid is composed of horizontal bands that become narrower as they ascend and vertical columns that vary in width and also become narrower as they reach toward the top of the building. The result has an upward momentum that gives the building a certain grace not found in the older sturdier brick and concrete warehouses.

During the hearing a number of Commissioners had concerns about the parklet as originally proposed, and added a condition requiring the parklet to go through a follow up Type II Design Review. The design for the parklet was approved by Bureau of Development Services staff in March 2017, who noted in their decision that the parklet will be activated by the adjacent buildings:

The proposed parklet design is significantly improved from the concept design approved as part of the prior land use review. The proposed design is now designed to be integrated with the adjacent development’s courtyard design and the parklet has the potential to be activated at its northern and eastern edges with openings in the adjacent commercial buildings. Notably, the west side of the parklet has a more significant and layered landscape buffer than the previous
version which will help to mitigate the aural and visual impacts of the I-405 freeway. The parklet will be accessible to the public during the daylight hours and will provide a sense of security due to the proposed nighttime lighting and visual connections from the adjacent developments.

Demolition of the existing structures on site began in March 2017. 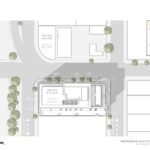 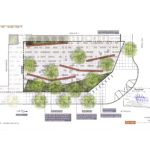 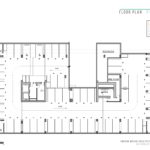 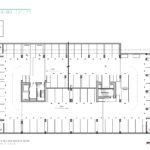 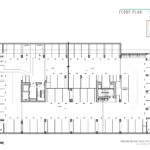 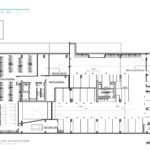 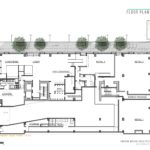 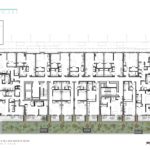 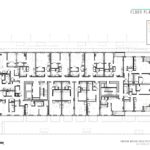 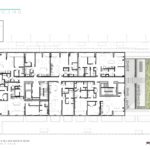 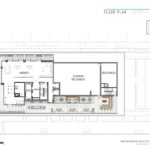 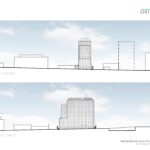 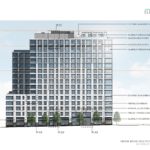 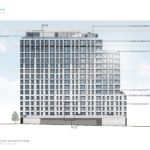 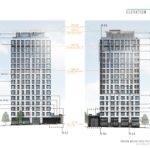 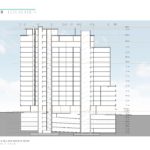